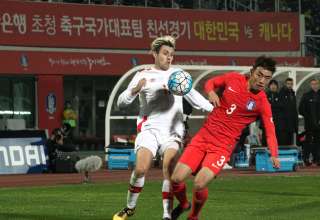 As some who follow the Facebook and Twitter accounts might know, I’ve been fighting through a bout of some pretty poor health over the last couple of weeks. I was discharged from the hospital today, but still need to stay off my feet for a good part of the next month or so.

Because of that, updates to the site will be, well, sporadic in nature. And the next issue of Plastic Pitch will likely be launched in January, rather than December.

So, with that disclaimer out there, I wanted to simply address a couple of items that went by while I was in the wonderful dreamy world of painkillers.

First off, Canada losing to South Korea this morning by a 2-0 count. A rough first 25 minutes did in the Canadian side in their friendly — as the home side got goals from Kim Bo-Kyung and Lee Jeong-Hyeop in that opening phase to seal the game. Bo-Kyung played at Cardiff City and Wigan Athletic before returning to the South Korean league; Jong-Hyep scored his fifth goal in his 15th appearance for his national side. For the Canadians, Marcel de Jong had a nice free-kick effort stopped, and Marcus Haber had an effort tick the crossbar — but really this was about seeing what some of the young players could offer the program, as many of the vets weren’t on this roster.

So, it was nice to see newly patriated keeper Jayson Leutwiler get through the second half without giving up a goal, and Ottawa Fury forward Carl Haworth get his first national-team cap. I’ve seen Haworth improve year after year playing in the NASL — and he deserves a round of applause for getting that first taste of what it’s like to be a senior national-teamer.

And, because friendlies well, don’t count for much other than world rankings, interim coach Michael Findlay tried to put a positive spin on the loss, that it was actually good for the program for the players to go down early, on hostile soil.

“We have to judge how they dealt with the stresses and dilemmas after going down early,” Findlayt said in the post-match notes issued by Canada Soccer.. “I thought they dealt very well by keeping their shape and not losing sight of the tactical plan. We stuck to the program, reassessed at half time, and when we came out I thought our application was very good.”

See? Losing can be  good thing.

As well, I wanted to offer a late round of applause to FC Edmonton captain Albert Watson and goalkeeper Matt VanOekel, both named to the NASL’s Best XI. Really, this was no surprise, as both were shortlisted for the league MVP award (guess who got my vote?).

I’ve watched Watson work so hard through the years; amazed at how natural it was for him to become a leader for FC Edmonton, a club located far away from his Northern Irish home. I’ve also seen how he’s embraced this country — he wants to be a Canadian citizen, how his family has flourished here. He has been nothing but an ambassador and a role model as an FCE player since he came to the club. No way coach Colin Miller could have asked for more from Watson. It’s fine to see class people get recognized for their work, and it’s been an honour to watch Watson from the broadcast booth over the years.

As for VanOekel, what can we say? His goals against average was 0.55. His save percentage was .856. He set a record with 16 clean sheets in an NASL season, out of 29 games that he started. Think about it, when MVO started, chances were better than 50-50 that he was going to shut your team out. To me, he’s the MVP of NASL. I get that voters like to put their support behind the flashier players, the guys who score. But, to me, the award goes to the player who is most valuable to his team. And you have to ask, did any player mean more to his NASL club than MVO meant to the Eddies?

Now, I’ve got to stop for a bit and rest. Catch you again soon.