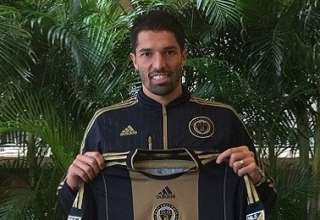 The last few days have been a whirlwind; and it’s meant I’ve had to a take the last 72 hours away from soccer.

Getting the fifth issue of Plastic Pitch to release required a massive push last week; as well, I have until the end of the month to finish the final draft of my latest novel for young adults. And, I am writing this post from an Austin, Tex. hotel room; last night, I attended the premiere of Malcolm Ingram’s new documentary, Out to Win, at the SXSW Film Festival.

I got the chance to meet some incredible athletes, both Canadian and American, who have come out; and, the film is a reminder — to paraphrase Outsports’ Cyd Zeigler — of the power sport has when it comes to social change. It was my pleasure to be in the company of Dave Kopay, the NFL player who, in the early ‘70s, was the first “out” athlete; Canadian women’s hockey goalkeeper Charline Labonte and her partner, Canadian speed skater Anastasia Bucsis; retired NBA centre Jason Collins and Wade Davis, former NFLer and the director of You Can Play.

And, well, when in Austin, let’s just say the whole town carries a mesquite smoke smell. So, yes, the barbecue is fantastic.

But, I did want to take the chance to catch up on a couple of things: The elimination of Canada’s U-17s from the U-17 World Cup picture and the second instalment of The 11’s Quintessentially Canadian Power Rankings. (For more on the methodology, click here).

As I mentioned last week, the rankings are allowing for Steven Vitoria, who played as a youth for Portugal but has made rumblings about playing for Canada, and Tesho Akindele, who turned down a Canadian national-team invite, went to a U.S. camp, but claims to have not made a final decision. Ethan Finlay is not counted because, while he’s been courted by Canada, the Columbus Crew striker has yet to make any sort of commitment — and he was born in America.

Now, back to the U-17s, who lost 2-0 to Costa Rica Sunday in their do-or-die playoff game at the CONCACAF Championships. Canada failed in its attempt to qualify for the U-17 World Cup.

Canada beat Costa Rica 3-2 in the group stage but, when the spot was on the line in the playoff, the Canadian scoring touch disappeared.

Said Canadian coach Sean Fleming: “I’m very disappointed, obviously. It’s more the goals we gave up that were easily avoidable. I give great credit it our kids, though. I’m so proud of them. They stayed to the task for the whole 90 minutes and it’s football. We created good chances today. We had a good game plan. There was nothing that surprised us. It was just a bit of lack of execution at the key moments. I’ve been in these games enough now that if you do that, you’ll unfortunately get the wrong result. So it’s very disappointing.

“It’s a great learning moment for our kids and for our program. But we created chances, which I was happy about. But why didn’t we finish—it’s one of those things. We had several chances to shoot in the first half that for whatever reason, we started passing instead of shooting the ball.”

But, let’s remember that we should look at our U-17s a little differently than our senior players or even our U-20s. These are all academy players, prospects who aren’t yet getting paid to play the game. And that means, without sounding too much like high-school newspaper journalism (“they all tried really hard!”), that we should be looking at our system and not the kids themselves. It’s a disappointing result, but in no way should we pile on to kids or have the same expectation of 16-year-olds as we do of senior professionals.