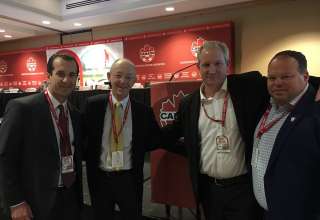 Ownership groups from Hamilton and Winnipeg.

Unofficially, it began years ago, with dreams of Canada hosting World Cup matches and the need for better Canadian player development. It moved to boardrooms in Hamilton and Winnipeg and Halifax.

But, officially, the Canadian Premier League era began Saturday in Whistler B.C., as the new league was ratified by the Canadian Soccer Association. The ratification process was on the agenda for the CSA’s annual general meeting, held this year far from prying media eyes. As well, the CSA officially sanctioned two of the new league’s teams — Hamilton and Winnipeg.  In the image provided we got from Canada Soccer, we clearly see Winnipeg Blue Bombers President Wade Miller and Hamilton’s Bob Young, who owns the Tiger-Cats. We know from meetings held in Halifax that an ownership group there isn’t far behind.

The project manager of the league, Paul Beirne, had this to say after the ratification vote passed unanimously.

“We’re excited! It’s a huge day for the game at all levels in this country!”

According to a release from Canada Soccer, on top of Winnipeg and Hamilton, the Canadian Premier League has received “expressions of interest” from eight other Canadian cities.

It said that the CanPL “will look to evaluate those candidates in the next few months.”

Young, owner of the CFL’s Tiger-Cats and the new CanPL Hamilton franchise — and also is the “caretaker” of the new league — issued the following words after the league was ratified.

“The leadership of the Canadian Soccer Association  has shown outstanding commitment to its vision for the future of soccer in Canada with the decision to ratify the Canadian Premier League  today.

“The CPL will fill the existing void in the national Canadian soccer development platform by operating a top level professional league, both on and off the field. The CSA and the CPL’s shared commitment is to foster the development of Canadian players.

“Most importantly, I’m really excited the Canadian Soccer Association has approved Hamilton’s application to become an official member of the CSA. This approval allows our Hamilton team to apply and join the CPL at the appropriate time. When that time comes, our club will play out of Tim Hortons Field, which has proved to be a world-class soccer stadium and has consistently provided a best-in-class live viewing experience for all of its events.”

The ratification brought the reign of outgoing Canadian Soccer Association president Victor Montagliani to a close. When Montagliani was elected to the CONCACAF presidency last year, the clock began to tick on his CSA term. Under the rules, he had one year to step down as CSA president.  On Saturday, the CSA’s membership voted to stay the course; former vice-president Steven Reed was elected to the top job. This choice sees the CSA opt for a true line of succession, as Reed worked closely with Montagliani.

“I look forward to serving the membership and building on the legacy of Victor Montagliani’s leadership of the past five years,” Reed was quoted in a Canada Soccer release.