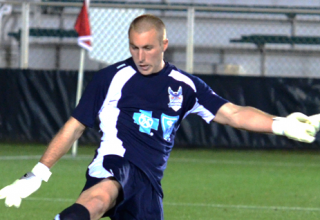 With the MLS season opener against Toronto FC at BC Place just one week away, Vancouver Whitecaps head coach Martin Rennie used Saturday’s game in the Carolina Challenge Cup as an important opportunity increase his team’s fitness and evaluate the majority of potential starters against a strong Chicago Fire squad in a similar situation.

As such, the Whitecaps could breathe a collective sigh of relief when there was enough of a reprieve from the heavy rains that drenched the Charleston, S.C. region over the past 24 hours to allow the Blackbaud Stadium playing surface to drain effectively.

There was enough of a reprieve in precipitation to allow the surface to drain, but it did make for some sloppy play at times. The end result was a 1-1 stalemate as Vancouver closed its trip to the Lowcountry.

In doing so, the Fire claimed the four-team tournament title with a 2-0-1 mark. The Whitecaps placed second at 1-1-1 mark while the Houston Dynamo and USL Pro side Charleston Battery each finished with one win and a pair of losses.

Darren Mattocks and rookie Kekuta Manneh once again had some good moments, particularly in the early going of a scoreless first half in which the Blue-and-White carried the better of play. In Vancouver’s best opportunity of the opening 45 minutes, a dangerous cross from Y.P. Lee found Daigo Kobayashi crashing the back post, but the sliding Japanese newcomer skied his attempt over the bar.

Chicago nearly got on the scoreboard when Jalil Anibaba sent a through-ball to Sherjill MacDonald for a one-on-one with Whitecaps goalkeeper Joe Cannon. The veteran netminder, who looked impressive throughout the game, stymied MacDonald’s ensuing shot and also the rebound attempt from Chris Rolfe.

“Tonight we didn’t combine quite as well as we have in other games,” Rennie said. “Although, at times we did, we just didn’t quite get the finishing touch. There were some good movements and good passages of play, but I think we can do that better.”

While Vancouver looked dangerous in the first half, Chicago threatened after the break, and the increased pressure paid off in the 57th minute with a goal from Maicon Santos. The substitute gathered a pass from Chris Rolfe at the top of the box, opened his body and rifled a shot into the upper-left corner, giving Cannon no chance and the Fire a 1-0 advantage.

The Whitecaps equalized 11 minutes later after designated player Kenny Miller drew a foul in the box. Mattocks stepped up to the shot and sent Chicago goalkeeper Sean Johnson the wrong way.

Overall, the game was about what you would expect from two teams that have endured a long preseason and are excited to get back home.

“I think in general our movement wasn’t quite as sharp as it has been,” Rennie said. “It’s been a long preseason and I think tonight you could see that just a little bit.”

While those players who featured in Saturday’s contest will participate in a recovery session on Sunday before flying to Vancouver later in the day, Rennie will join the remaining players in Cary, N.C., for a Community Shield match against the Carolina RailHawks. It will be a reunion of sorts for the second-year Whitecaps coach and several members of his current roster who previously suited up for the NASL squad.

Kickoff at the recently renovated WakeMed Soccer Park is slated for 1:30 p.m. ET. It will be Vancouver’s final preseason game before beginning the regular season on March 2.

The Triangle isn’t the only preseason destination well-known to Rennie, however.

He also has familiarity with his surroundings in Charleston, S.C., not only from his time coaching the RailHawks but also as a working professional with Blackbaud, Inc., whose world headquarters are adjacent to the 5,100-seat stadium that Battery call home.

Prior to beginning his coaching career with the Cascade Surge in 2005, the Scotland native worked for the software company in sales and marketing. And while he was based in Blackbaud’s Glasgow office, he would frequent the Holy City for annual meetings.

Rennie made one change to the starting lineup used a week ago in his squad’s 3-2 win over Charleston, inserting Cannon in place of Brad Knighton.

Cannon’s effort against the Fire, though, leaves Rennie with a difficult decision for the regular-season opener and places an increased focus on Knighton’s performance in Sunday’s game.

“I think that Joe did well,” Rennie said. “I think he’s done well all preseason, all training camp, and Brad’s done fairly well, too. So I think we’ll just have to wait and see. I feel comfortable however we decide to go with that one.”

Alain Rochat and Gershon Koffie served as the holding central midfield pair in the Whitecaps’ 4-2-3-1 formation, with Miller starting in the No. 10 spot before being replaced in the 77th minute by Camilo Sanvezzo. Kobayashi (right) and Manneh (left) occupied the flanks.

Rennie’s complimentary post-game comments of Miller’s performance echoed similar statements he made after Vancouver’s 3-2 win over the Battery one week ago.

“I thought he did fairly well,” Rennie said. “I think he made good movement for the penalty kick. He filled in a lot of little spaces and gaps, (and) closed down well for us.”

Jay DeMerit did not see the field in Charleston as he recovers from an Achilles injury. Brad Rusin filled in for the Whitecaps’ captain and was joined by Lee, Andy O’Brien and Jordan Harvey on the back line.

Neither of Vancouver’s recent high-profile signings was on the game-day roster. Honduran international Johnny Leveron, 23, arrived into camp Tuesday while Nigel Reo-Coker trained for the first time three days later, but Rennie mentioned that the 28-year-old English Premier League veteran will probably see action – likely in a central midfield role – against Carolina.

“He feels like he can play 90 minutes, but he’s not going to do that,” Rennie said with a smile. “But he will play a little bit, and obviously we’ll see how he does. And after that we’ll decide how we go for Saturday.”