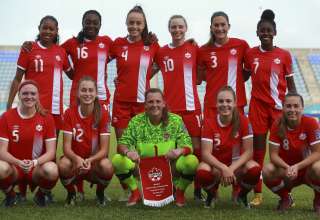 A first-half howler from Canadian defender Hannah Taylor put her team behind the eight ball in their opening match of the CONCACAF U-20 Championship.

Taylor swung and missed on what was supposed to be a back pass to her keeper, Rylee Foster. Costa Rican attacker Catalina Estrada took advantage of the gift, and hammered the ball into the roof of the Canadian net.

But the Canadians responded with a shock-and-awe second half, winning their tournament opener in Trinidad and Tobago Thursday by a 3-1 score.

The eight-team tournament serves as the qualifier for the U-20 Women’s World Cup. The two finalists and the third-place team will punch their tickets to France.

Canada had plenty of the ball in the first half, and pressed into the final third with regularity. But, over and over, Canadian players passed up shots to try and make the perfect passing play. On one occasion, they had the ball in the Costa Rican penalty area, had a couple of chances to shoot, played the ball outside the box, just so they could cross the ball back into it. The Costa Rican defenders took advantage of the time afforded to them by resetting and reorganizing. It was too much.

But the Canadians upped the pace of their play after the halftime break, to great benefit Early in the second half, Canada’s Shana Flynn had a good chance from just outside the box, but, under pressure from a Costa Rican defender, she sprayed her shot wide.

But, five minutes into the half, Canada got the equalizer. A through ball from Sarah Stratigakis bounced behind the Costa Rican backline. Huitema lunged, got her toe on the ball and lifted it over the keeper.

In the 53rd minute, Stratigakis went to the spot after Emma Regan was brought down in the box by Costa Rican defender Stephannie Blanco. What unfolded was, sigh, vintage CONCACAF. Stratigakis’s initial penalty was parried by Costa Rican keeper Fabiana Solano Vargas, but the Canadian got to the rebound and, after taking a touch, was able to poke the ball through three Costa Rican defenders who had scrambled back to the goal line after the initial save.

But the linesman’s flag was up, despite the fact it was impossible for Stratigakis to be offside because she followed her shot — which was then touched by the keeper.

To their credit, the Canadians kept pressing, and got their deserved lead in the 57th minute, as  Gabrielle Carle hammered home a great pass from Huitema.

In the 65th, Huitema sacrificed her body, sliding into the Costa Rican keeper to get to the ball. The result? The ball went into the net and gave Canada a two-goal margin.