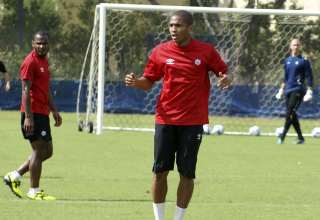 In the most dominating game in the history of the men’s program, Canada easily beat tiny St. Lucia 7-0.

Canada controlled the play early but didn’t carve out much in the way of serious goal-scoring chances until Adam Straith, starting in place of Captain Kevin McKenna, lofted a high ball over top of everyone. Jackson raced onto the ball and chipped St. Lucian keeper Pessius Paulius in the 19th minute.

“(Jackson’s) a young player that is going to give you 100 per cent every single time and I was really glad for him,” said Canadian coach Stephen Hart. “I told him we have confidence in him.”

That confidence was more than rewarded as Jackson was involved all night, causing havoc on the St. Lucian back line, which just couldn’t handle the Norwich City striker.

“The first game was a little bit of a surprise,” said Jackson, referring to the somewhat underwhelming 4-1 win last month in Toronto against this same St. Lucian side. “We weren’t sure who we were playing but we knew who we were up against today and we went out and executed correctly.”

Jackson doubled his, and Canada’s, goal tally just eight minutes later with Straith again as the provider. Terry Dunfield, who had come in for an injured Will Johnson, swung in a corner kick that was tapped on by the big defender to Jackson, who scored from right in close. (Johnson later tweeted that he had an ankle sprain and would be heading back to Utah to join his Real Salt Lake teammates, a sure sign that he won’t be available for the Oct. 11 match against Puerto Rico.)

It was a creditable performance by Straith, who formed an unfamiliar pair in the centre of Canada’s defence with David Edgar.

“(Edgar’s) defending was solid,” said Hart. “He read things nicely and (Straith) brought the ball out of the back very well.”

After Olivier Occean got his first of two on the night by deflecting a Jackson shot with 10 minutes left in the half, Jackson himself finished a solid half’s work by scoring a typical goal-poacher’s goal when he put in a rebound of an Iain Hume shot on 39 minutes.

Occean’s second of the night came seven minutes into the second half when he was played in all alone and, after rounding Paulius, he just walked the ball over the goal line.

Hume’s first came in much the same fashion when he scored 20 minutes later on a breakaway of his own.

“I think the way we dominated the game physically, mentally and obviously technically it was pleasing for us and obviously puts us in good stead for Tuesday (against Puerto Rico),” said Hume.

Much to the relief of Canadian fans who were hoping to see Toronto FC’s Ashtone Morgan get cap-tied to Canada, Hart inserted the player into the game with the team’s final substitution.

While there were some nervy moments with the youngster’s touches, he did set up the final goal of the game with a cross from the right hand side that Hume controlled, took a few touches and slammed into the net.

“It was a much needed win and I’m very pleased the way we came out,” said Dwayned De Rosario, who was captain on the night.
“It was nice to see (Julian) de Guzman get his 50th cap, Ashtone Morgan getting his first and one of our players getting a hat trick.”

The game, played at the Beausejour Cricket Oval in Gros Islet, just north of the capital of Castries, kicked off with a strong breeze coming through making it feel much more comfortable than the temperatures of over 30 C that were felt throughout the day.