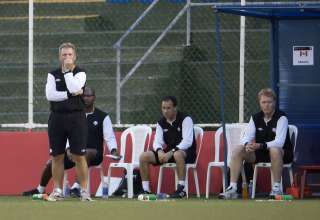 It doesn’t matter if it’s men or boys on the pitch — when Panama is hosting an international soccer match, there’s going to be gamesmanship.

Canada faces the Panamanians in the semifinals of the CONCACAF U-17 championship on Wednesday. And, even though Canada clinched a berth in the U-17 World Cup with the 4-2 quarter-final win over Jamaica, coach Sean Fleming was clear that the team’s goal is to win the confederation championship.

“We let the boys enjoy it for 48 hours,” said Fleming in a conference call on Monday. “And today it’s back to work.”

But it won’t be easy. The semifinals will be staged at the national stadium, on grass — where a large crowd is expected to support the home side. Canada’s group-stage matches and quarter-final match was staged on an unpredictable artificial surface.

Will Canada get the chance to train on grass ahead of the game? No. Fleming said they’ve been allocated a turf field. Funny that no grass fields were available. And that’s a big thing: Anyone who has trained on turf in the heat knows that not only is it harder on the knees, but it reflects the heat in a way that grass doesn’t. If it’s hot outside, it’s even hotter on the turf.

We just have to think back to World Cup qualifying. In September, the Panamanian Football Federation distributed the location of the Canadian team’s hotel, and a street party was held just outside the doors — as a way to keep the Canadian players from getting sleep. And then-coach Stephen Hart told stories of cars strategically blocking the Canadian team bus from getting to the training ground.

While Fleming made sure to be politically correct and use the word “coincidence” to describe the goings-on in Panama, he said that the team won’t use any of the things that may happen to it as an excuse. In fact, it might just be a character builder for players who are going to have to get used to playing in hostile Central American environments if they are to succeed as future members of the national program.

“The question is ‘how can they handle a big crowd?’” said Fleming. “Panamanians love their football. Are we going to see some things down there? Yeah, I think so.”

But Fleming promised “we are going to do our best as a coaching staff” to keep distractions down to a minimum.

Of course, Hart promised that as well — and his club wasn’t close in a 2-0 loss to the Panamanians.

But U-17 is a different level — and the comparison may be unfair.

Fleming expects a massive challenge, though.

“They (Panamanian U-17s) are together all the time. The players are very technical, they are well-coached. And they are very well organized.”

But if this Canadian team stands out from any other Canadian team we’ve seen in recent years, it is in attack. With Hanson Boakai pulling the strings, Marco Bustos’s service and the likes of Andrew Gordon and Jordan Hamilton up front, this might be the most dynamic Canadian team we have seen at any level in a long time.

“We have individual qualities in the attacking part of the game that allow us to ask some big questions of teams,” said Fleming.

And the balance of power constantly shifts. The Americans, usually shoo-ins at the U-17 level, are out of the tournament. So the pressure is on Fleming to not only prepare Canada’s young players for national-team service down the road, but to keep up with Joneses.

“People don’t realize how strong CONCACAF has become, powerhouse countries are no longer safe. We need to keep pace.”

And the Panamanians will make it hard to keep pace — by doing their best to keep Canada away from the track.