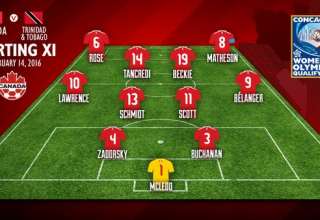 When Canada Soccer tweeted out the starting XI for Sunday’s Olympic qualifying match, it was like a flashback to the early ‘50s. Had Canadian national women’s team coach John Herdman connected with his inner Magical Magyar? The throwback 2-4-4 formation shown on the team sheet would have made Gusztav Sebes proud.

Seeing a 2-4-4 would be like watching an NHL team put out a lineup that had a rover and a cover point on it.

(True, Hungary’s famous formation was a 4-2-4, a tactic that was later exported to Brazil, but the wing backs pressed so damn high that 2-4-4 would be a more accurate assessment of how the Golden Team played in the 1950s.)

Herdman’s team responded with a 6-0 win over Trinidad and Tobago, running Canada’s record to 2-0-0 in the group stage, 11 goals for, none against (Hungary-like totals, by the way). Six different players scored. And, even though Christine Sinclair didn’t start, she came on, got a half hour of work in, and scored her 159th career international goal good enough to move ahead of American Mia Hamm for second on the all-time FIFA women’s goal-scoring list.

Actually, the way Canada played the game was proof that sometimes it simply doesn’t work to describe a formation in a numerical sequence. That’s because Canada had many attacking players going forward — two wide banks of four. But, when the Canadians needed to retreat, they had enough in numbers. You could have called it a 2-4-4, 4-2-4 or even a 4-4-2 and, at times during the game, you’d have been right.

There were really only two moments of worry for Canada in this game; early in the match, Ashley Lawrence clashed heads with T&T’s Victoria Swife. Lawrence needed to be examined by the team doctor and had a massive bump on her forehead that made any boxing fan think back to that grapefruit sized orb that swelled on Hasim Rahman’s head thanks to the beating he was receiving from Evander Holyfield. And, late in the first half, a dreadful giveaway by Desiree Scott right in front of her own penalty area allowed T&T to create its only meaningful scoring chance of the game, which was parried away by keeper Erin McLeod.

But, Trinidad and Tobago has now faced Canada eight times at the senior level — and still has yet to score a goal.

There were some concerns; Canada got out of the first half only up 2-0, and missed the goal or had offensive players needlessly drift offside several times. It was almost a case of too many cooks in the final third. But it was the veteran duo of Diana Matheson and Melissa Tancredi who found the back of the net for Canada.

Sinclair came in at just past the 60-minute mark, then was sprung free on goal thanks to a wonderful cutting through ball from Janine Beckie. Beckie would later score a goal of her own, and defender Kadeisha Buchanan and teenager Jessie Fleming also found the back of the net. Sinclair had a golden chance to score a second, but missed what was a sitter. Better to miss one of those when your team is up 6-0 and get it out of your system.