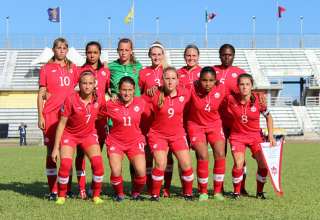 Canada gave us an indication of just how much of a walk in the park its CONCACAF U-17 Women’s Championship opener against Guatemala was going to be just 10 minutes into the match.

Already up 1-0, Marie Levasseur broke past the Guatemalan defensive line. And, instead of taking on the keeper one-on-one, she decided to try and pass to a trailing teammate instead. It had all the feel of a hockey empty-net attempt, when the lead forward sheepishly passes the puck to a teammate, as if it’s dirty to score such an easy goal. The chance went all wrong. But it didn’t matter, as Canada piled on the offence in an 8-0 win that had the feel of a team being on cruise control.

Marie Mychele Metivier scored twice in the first half, while Levasseur and Nadya Gill each got second-half braces.

Metivier’s first goal saw her take a pass from Emily Borgmann in the middle of the box. She got to open space simply by taking a couple of long steps away from the Guatemalan defender.

And that a prime example of why this game can’t really be used as a measuring stick. Throughout the game, the Guatemalans showed that their young products don’t have the sophistication of the Canadian girls. Simple things like man-marking and closing off defensive gaps were too much for the Guatemalan side.

Guatemala did get one good chance before the end of the first half, but Bianca St-Georges cleared the ball off the line. Borgman and Jessie Fleming scored singles for Canada, which plays Trinidad and Tobago on Saturday.