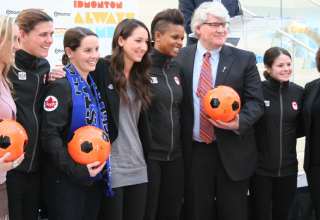 While the four members of the Canadian women’s national team who were in Edmonton Monday will all soon head Stateside to report to their NWSL teams, they still dream of playing pro soccer in their home and native land.

“We are all very proud Canadians,” said 10-year national-team veteran Rhian Wilkinson, sitting alongside Olympic bronze-medal winning teammates Christine Sinclair, Karina LeBlanc and Diane Matheson at a special media event held at Edmonton’s City Hall Monday. “We’ll all be heading to the U.S. in March, but we all want to play in our own country as soon as possible.”

The message here: The Canadian women want to see the NWSL, which kicks off in eight U.S. cities this year, expand to Canada as soon as possible.

All four were part of the 16 Canadians allocated (two per team) to the new league, with the Canadian Soccer Association picking up the tab for their salaries. LeBlanc and Sinclair will play together in Portland; Wilkinson is off to the Boston Breakers, while Matheson is headed to the Washington Spirit.

All four were in Edmonton for two days of sold-out clinics being held at the Commonwealth Recreation Centre — and the City of Edmonton used the visit as a way to boost itself as a soccer city and a future host of major events, including games for both the 2015 Women’s World Cup and the 2014 U-20 Women’s World Cup. Edmonton City Manager Simon Farbrother said the province now has 80,000 registered soccer players, and 55,000 for indoor soccer.

After Edmonton hosted the near sell-out final of the 2002 U-19 Women’s World Championship — the tournament that was Sinclair’s coming-out party as the greatest soccer talent this country has ever seen — registration in Alberta surged by 40 per cent. And Alberta Soccer expects another surge after hosting Women’s World Cup games.

“I think we have started the process,” said Sinclair of the boost in soccer’s popularity in Alberta. “Just listening to the stats from 2002 of the growth of soccer in Edmonton, with the upcoming Women’s World Cup it can continue and become that much bigger.”

Even though the national team is six months removed from winning the bronze medal in London, LeBlanc said the reaction from Canadians coast-to-coast is still amazing to her.

“When we were young, we looked up to different people,” said LeBlanc. “When people look up to us that way, it’s an honour.”

Earlier Monday, the CSA announced that Canada has added to friendlies to the schedule. Canada will travel to England for an April 7 match, and then Sinclair and co. will be off to Germany for a June 19 friendly.