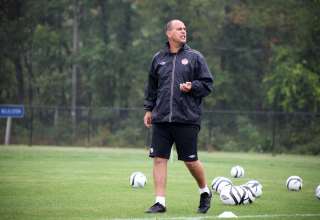 The Canadian Soccer Association announced that our men’s national team will play Armenia during the FIFA international match day of Feb. 29.

The game will take place in Cyprus, as clubs will have just three days off, and there is no way coach Stephen Hart could put together a training camp and have players ready on Canadian soil. Canada will use European-based players. But PSV Eindhoven midfielder Atiba Hutchinson has already all been but ruled out as he recovers from a knee injury. Hutchinson played six minutes in a recenty winter-break friendly against Kaiserslautern.

“Atiba Hutchinson (is) unlikely to be fit for Feb 29th friendly v Armenia,” Hart was quoted through the Canadian Soccer Association’s Twitter account.

Hutchinson may not be the only worry. Josh Simpson has left Manisaspor, and the Turkish club may sue. If there is a legal battle, it’s likely that no other club — fearing FIFA sanctions — would sign Simpson until there’s a judgment. And, if Simpson isn’t playing, he jeopardizes his place with the national team. Of course, if Manisaspor backs down, then Simpson can find new employment and fight for a first-team place somewhere else.

Armenia isn’t a minnow anymore. The team finished third in its Euro 2012 qualifying group, behind Russia and Ireland. Armenia finished ahead of Slovakia — a team that qualified for the 2010 World Cup — in the group. For North American fans, the most familiar name in the Armenian lineup is Yura Movsisyan, who left Real Salt Lake in 2009.