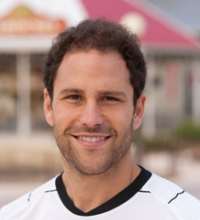 Canadian Kevin Harmse has a piece of Texas soccer history that no one can ever take from him.

Harmse scored the only goal as the San Antonio Scorpions went on the road and beat the Carolina RailHawks 1-0 in NASL action on Saturday night. It’s the first win in Scorpions’ franchise history.

Harmse, who spent a few weeks last season with his hometown Vancouver Whitecaps and also was with Toronto FC for parts of 2008 and 2009, is looking to rebuild his injury plagued career with a solid NASL campaign.

He scored the winner with eight minutes left in the second half, after a give-and-go with teammate Esteban Bayona.

Harmse was the first player ever signed by the Scorpions and is the captain of the team. Former Whitecaps Wes Knight, Blake Wagner and Greg Janicki are also with the Scorpions, as is ex-Toronto FC midfielder Matt Gold.

Wagner started in the historic win, while Gold came on as a second-half sub.