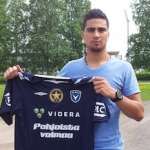 The Canadian keeper has signed on with Finnish side AC Oulu. The club announced the deal Tuesday.

AC Oulu is in second place in the Finnish second-division table. The club plays in a 7,000-seat stadium.

“I’m happy to be back in Europe and hopeful that our season continues to bring good results,” Monsalve told The 11. “I’m also eager to help the team reach its goal, to win promotion to Finland’s premier league. The club has treated me extremely well thus far and I feel great about their belief in me, and the responsibility to perform week in and week out. I’m very much enjoying the challenge.

Monsalve is no stranger to Finnish football. After being part of the TFC roster in its inaugural season, he then went to Finland to play a couple of seasons at Inter Turku. He returned to Canada and joined FC Edmonton in 2011. But, in 2012, he was expected to be the No. 1 keeper, but then got hurt, then fell out of favour after one NASL appearance couple of starts in the Amway Canadian Championship.

Monsalve was a fan favourite, though, who made time for charitable efforts in Edmonton. He helped disadvantaged kids get sporting equipment and was a fixture at Ronald McDonald House.

Before 2013 training camp opened, FCE announced that it and Monsalve had parted ways by mutual consent. But Monsalve has a different take.

“The Edmonton supporters treated me fantastically and there’s nothing but positive experiences that they’ve left me with and for that I thank them. I never wanted to leave FC Edmonton and I want to make it clear it wasn’t a mutual parting of the ways. It was (former director of soccer) Joe Petrone who decided I wasn’t needed.”

Monsalve said that he was planning to go camp with the Eddies, and then found out he was being cut just a few days before the players were to hit the field. Had he been released right after the 2012 season, he would have had an easier time finding a new club. But he felt like Petrone — and Monsalve stressed that this has nothing to do with current coach Colin Miller — left him twisting in the wind.

“It’s just unfortunate that someone like Joe Petrone had too much say for too long. He could have potentially ruined guys’ careers. What if I wasn’t given an opportunity by a club this year? Then getting a club after that is extremely hard, then I’d have no choice but to start working to make a living and then what? Sacrifice my training because I’m exhausted from working long hours? And I’m not the only one who went through that… And if I don’t perform well then that’s fine, cut me but at least be professional about it. I got an email with no explanation just a release paper on February 6 or something close to that date, stating that I’m released and saying that they’re doing so now as a favour so that I’m able to find a club. How could I find a club when all of Europe had started their leagues, Scandinavia and North America were all in their preseasons?

“Of course, this has nothing to do with anyone besides Joe. And it’s unfortunate that he spoke for the whole club when making decisions.I still have a good relationship with the club and I wish them nothing but the best. I have a lot of love for FCE, the city itself and the supporters.”