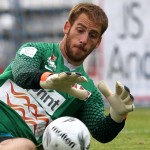 Canadian keeper Tomer Chencinski’s trial with Swedish side, Orebro SK, has been successful. Chencinski has confirmed that he will be with the club in the 2012 season, and has completed a transfer from VPS, the Finnish first-division side where he starred in 2011.

“Great club, and very happy about it,” wrote Chencinksi in an e-mail to The 11.

“Will open up new doors. Like I always said, hard work pays off, but it doesn’t stop now.”

Chencinski signed with VPS to be the backup in 2011; but, after impressing in training, he got his shot to be the No. 1 six games into the season, and he didn’t look back. He did well enough in Finland that he attracted scouts from Orebro, who offered him to go to Sweden for a trial as soon as the season ended.

But Chencinski will have a battle on his hands; Orebro has also signed Swedish veteran keeper Jonas Sandqvist for the 2012 season.

“We have two good goalies now with Jonas Sandqvist and Tomer Chencinski,” OSK manager Lennart Sjogren told the club’s website (translated from Swedish). “Tomer is a good character player with good attitude, I think he will work well in this group.”

Chencinski was on Toronto FC’s roster, playing behind Greg Sutton, in the team’s inaugural season. But, he didn’t see any MLS action in 2007 and moved around to various clubs, including the Harrisburg City Islanders (where he teamed with current FC Edmonton midfielder Dominic Oppong).