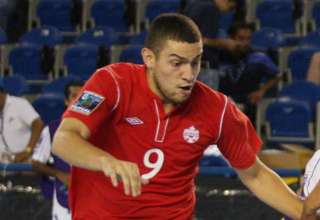 The Cardiac Kids from Canada scored the first two goals, but then succumbed to a barrage from the hosts.

On Monday night, Canada lost its opening match of the CONCACAF Futsal Championship to Guatemala by a 7-3 count. Humberto Escobar was the catalyst for the Guatemalans, who are the defending CONCACAF champions. He scored four goals on the evening, including a left-footed half-volley wonder strike in the first half.

An own goal created by some hard work from Robbie Tice and San Diego State University’s Jordan Ongaro gave Canada an early lead. Matthew Rios then absolutely pummeled a free kick through the Guatemalan keeper to put Canada two goals up.

For those unfamiliar with futsal, it is the indoor version of the game played without boards and a heavier ball. Because the nets are so much smaller than the outdoor game, on free kicks there is no point in trying for placement. So, players simply try to blast the ball through the keeper — and that’s what Rios did.

But even though Canada was up 2-0 on the Guatemalans 10 minutes in, the hosts had the goal under siege. And, eventually, the pressure paid off. After Alan Aguilar scored on a penalty, Escobar scored his first of the night, an absolute rocket of a half volley that left Canadian keeper Joshua Lemos no chance. Canada got the lead back, Alvaro Yaques tapping into an open goal after a wonderful pass from Rios went through a defender’s legs.

But Escobar added a second before the half to send the teams to the dressing room at 3-3.

Escobar went right back to work in the second half, getting his hat trick goal. Keeper William Ramirez then scored on a long punt (goalkeepers getting on the scoresheet is not all that uncommon in futsal) to put the Guatemalans up two and take the life out of the Canadian squad.

Pablo Estrada scored on a penalty before Escobar got his fourth.

Remember, though, that Guatemala is the recognized regional futsal powerhouse, while Canada had to win a qualifying playoff series with El Salvador just to get into the CONCACAF tournament. This was definitely a case of the tournament opening with the No. 1 seed taking on the bottom. The Canadians got into the tournament thanks to a miraculous comeback against El Salvador in a two-legged qualifier held in Guatemala days before the tournament proper was set to begin Down 4-1 after the first leg, Canada led the second leg only 4-2 with 16 seconds left. But Rios scored at that point to tie the aggregate score and Lemos, the keeper, scored with just five seconds left to send Canada through — one of the greatest comebacks by any team kicking a ball and wearing Canada’s colours.

The team was managed by Edmonton’s Ross Ongaro (uncle of Jordan), but he left the post last year to take a lucrative offer to become coach of China’s beach soccer program. His former assistant, Sipho Sibiya, an indoor-soccer veteran on the Canadian scene, took over the futsal program. Ironically, Sibiya played for Ongaro through much of the mid-‘90s. Ongaro was coach of the Edmonton Drillers of the old National Professional Soccer League, while Sibiya was one of the star forwards of the team. The Drillers saw many Canadian players who were in the A-League in the summer spend their winters in the Alberta capital playing the indoor version of the game.