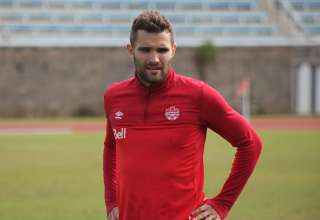 So, Sunday’s friendly between the Canadian men’s national team and Bermuda had a feeling of same old, same old. Of course, the stream was — well, nonexistent. And, after starting keeper Callum Irving was subbed out at half, back-up Sean Melvin was injured, forcing coach Michael Findlay to put defender Adam Straith in goal.

The fact that Canada won the game 4-2, with Irving, Ben McKendry and Ben Fisk all making their senior national-team debuts as members of the starting XI, well it felt almost like the subplot.

Findlay brought 28 players to camp, but brought just 18 to Bermuda for the game. Midfielder/fullback Nik Ledgerwood and forward Carl Haworth didn’t make the trip to Bermuda due to injuries; and striker Tesho Akindele was unavailable on game day. Findlay chose to bring just two keepers to Bermuda, leaving Marco Carducci — who was also in camp — as one of the 10 omissions.

Jalen Harvey, who played NCAA soccer for DePaul University, opened the scoring in front of a crowd of 1,814 in Bermuda, but Toronto FC’s Jonathan Osorio quickly brought Canada level.

Tosaint Ricketts scored to give Canada the lead before halftime, and then things got a littl bit, strange. Findlay brought in Melvin to replace Irving, and the new keeper allowed LeJuan Simmons’s touch to go underneath him, allowing Bermuda to tie the game. A back-pass mixup between Straith and Melvin led to the chance, and there was question if really it was an own goal or not. Straith played a square ball across his own penalty area for the keeper, but Simmons arrived at the same time the ball finally got to Melvin. The ball went in, Simmons got credit for the goal, and Melvin was hurt in the collision.

Melvin had to leave, which forced Straith into the goal. And, because Canada had burned all of its subs by that point, Straith couldn’t be replaced in the back and Canada had to labour through the rest of the match with 10 men. But, despite the trying conditions, Canada scored twice to decide the game — a header from Jay Chapman off a Kyle Bekker corner, then Anthony Jackson-Hamel sealing the result late.

And, yes, because Straith came in with the score tied 2-2, and Canada later got the goals to earn the result, he would get credit for being the winning goaltender.

What is totally awesome is that Straith’s Canada Soccer profile has now added columns of “clean sheets” and “goals allowed” to his stats (follow the link, click on the “Match-By-Match” tab). Usually, those columns are listed as N/A in the profiles of players who, well, aren’t goalkeepers. But, if Straith never plays in goal again, he can point to his 1,000 save percentage (he had to make at least one stop in the game) and his 0.00 goals-against average. Beat that, Manuel Neuer.