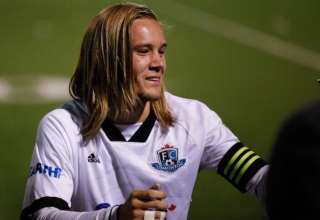 Those two dates on FC Edmonton’s NASL spring-season fixture list now loom a heck of a lot larger, now that the news is out that former Eddie Paul Hamilton is on trial with the RailHawks.

Hamilton confirmed with The11.ca Monday night that a deal has not yet been signed. But Hamilton is in North Carolina and has been working out with the RailHawks.

“A couple of teams had expressed interest to my agent and I,” Hamilton wrote in a statement to The 11.”But with it being so late in preseason, a lot of teams did not have room in their budget for another player. That being said, Carolina had expressed the most interest and invited me to come down.”

Hamilton, a former CIS Player of the Year and a member of the NASL Best XI in 2012, was recognized as one of the NASL’s best defender. But new FCE coach Colin Miller’s decision to cut Hamilton was easily the most surprising move any NASL coach has made over the course of the preseason. Despite not coming to terms on a deal with the Eddies — though the majority of the other players in camp had made deals — Hamilton remained in the FCE fold until two weeks ago, when the team and player finally parted ways. Hamilton wanted to stay, and said he’d even have considered the pay cut that FCE had on the table if it meant remaining with the squad.

Hamilton was named the Edmonton Supporters’ Group player of the year in 2012, so there’s no doubt that the fans will have something special prepared to welcome Hammy back to Edmonton on June 16.

Ironically, in 2011, the Eddies and RailHawks had more than a few incidents in their matches, from keeper Lance Parker suffering a compound fracture of his arm to several decent shoving matches in the games down in North Carolina. Hamilton was front and centre in a few of those incidents — and you have to wonder just how much the idea of signing someone you hate to play against played in the minds of RailHawks’ management, even if the team has been radically changed since the 2011 season.

Hamilton is now with a team that finished tied for last in goals against last season. The RailHawks, despite being a playoff team, were far worse defensively than the Eddies in 2012. And Hamilton knows that means he could be asked to do quite a bit for coach Colin Clarke.

“I’ll just be trying to help this team defend better in anyway that I can. Last year is behind this group of players and everyone is looking forward to improving that statistic.”