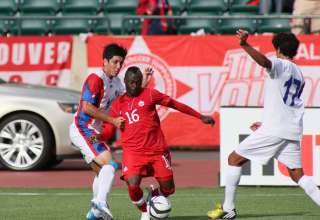 A penalty-kick goal from the Columbus Crew’s Jairo Arrieta gave Costa Rica a 1-0 win over Canada in Tuesday evening’s friendly at Commonwealth Stadium.

Arrieta’s goal came after midfielder Samuel Piette was ruled to have fouled the forward in the penalty area, just 15 minutes into the match. The foul came after Costa Rica’s Christopher Meneses slipped the ball from the right side into the Canadian penalty area. But, Canadian centre back Andre Hainault was square to Arrieta, had good position, but Piette came streaming in and made contact.

Canadian coach Colin Miller was aggrieved by the call, made by U.S. ref Chris Penso. Miller was already not in the best of spirits after his NASL side, FC Edmonton, had two controversial penalties called against it in Sunday’s loss to Fort Lauderdale.

“I cannot believe my luck and FC Edmonton’s luck, this season with penalties and referees,” said Miller. “At least I managed to stay here on the field tonight with the decision. I haven’t seen it, but I’ve been told it was a soft decision.”

But that’s life in CONCACAF. An attacker will go down with the slightest touch, and it’s a lesson learned for Piette.

The 8,110 fans who made it for a 6 p.m. kickoff — despite construction zones bringing traffic to a standstill around the stadium — saw plenty of industry from the Canadian team, but little in terms of invention. While a very young Canadian squad did some good things, Costa Rican keeper Patrick Pemberton had very little to do. Really, his only save of note came in the first half, as he came out to cut off a bad-angle shot from Randy Edwini Bonsu after the speedster made a solo run up the right side.Canada had some great chances to score, many off of headers. Doneil Henry, coming up from his centre-back spot, missed the net on three headed opportunities. And Hainault had a chance late in the first half that he headed off the turf and just wide. All of them came off deliveries from Kyle Bekker. Miller had nothing but praise for Bekker, saying the TFC midfielder’s service was excellent, and that Canada could have won the game 4-1 or 4-2.

Issey Nakajima-Farran blasted a half-volley off a cross from right back Nik Ledgerwood inches over the bar, just seconds after Arrieta had given Costa Rica the lead.

As Canadian fans have got used to seeing over the years, creating the scoring chances is one thing, finishing them is another.

Miller said the young squad showed the “nucleus of something positive moving forward.” And, for players like Edwini-Bonsu or Daniel Haber, the young striker out of contract at Maccabi Haifa who made his Canadian debut in the second half of the game, there’s the hope that a cap or another cap will help them find new club homes. Edwini-Bonsu, the liveliest Canadian on the pitch, left after 60 minutes with a hip flexor issue.

“Some guys definitely put themselves in a shop window, North America wise or in Europe,” said Miller.

In the second half, Canada had the bulk of the chances, but Costa Rica had the three most threatening chances. Osvaldo Rodriguez looped a header over Canadian keeper Milan Borjan and into the goal, but was ruled to have shoved Ledgerwood on his way up.

Arrieta crashed a headed chance off the bar, and Borjan was forced into a point-blank save from Kevin Cunningham.

Late in the match, Penso sent off both Meneses and Ledgerwood, after the Costa Rican put his hands to the Canadian defender’s face. Miller felt Penso lost control of the situation.

“I didn’t think the incident at the end of the game merit two red cards. Two yellow cards would have sufficed, just in the spirit of the game. For me, there was no need for two red cards. It blew that situation right out of proportion.”

In the second half, Tosaint Ricketts came in as a second half sub, despite the fact he didn’t train with the team due to his club commitments in Norway with Sandnes Ulf. Miller said that Ricketts went right to the training table after the Canada match with stomach cramps.

Ricketts talked about the sacrifice needed so he could play in his home town.