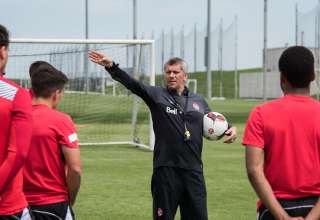 The Canadian program decided not to take any players from MLS or NASL playoff teams — so the Montreal Impact, Toronto FC and FC Edmonton were untouched. As well, FC Dallas’s Tesho Akindele wasn’t taken. The Canadian depth pool also features a long injury list; so players Findlay might have wanted to take a look at — Sam Adekugbe, Brett Levis, Ben McKendry, Michael Petrasso and Russell Teibert — were all unavailable.

As Nov. 11 falls within the FIFA-recognized international window, Findlay said that the Canadian program would have had the right to take players from the NASL and MLS teams still playing. But the decision was made that it was better for the program if players on those teams were, as Findlay said, “playing valuable minutes in valuable matches.”
It’s long been the rub that Canadian players weren’t seeing enough minutes on their club teams; so, taking players away from their clubs during their playoff runs would send the wrong message and wouldn’t serve the program in the long term.

Canadian No. 1 keeper Milan Borjan, who made highlight reels all over the world yesterday after being beaten by a sensational individual goal from Arsenal’s Mesut Ozil in Champions League play, wasn’t called in from Ludogorets to play for Canada. And veteran Atiba Hutchinson, who played for Besiktas in Champions League action Tuesday, as yet to decide on his international playing future.

Findlay said the lines of communication between himself and Hutchinson are open, and they spoke before the Champions League match.

“The good news is that that he is in constant contact with us.”

Findlay said there were no refusals — that each player who was called and asked to play for Canada ended up accepting the invite.

As previously announced by Shrewsbury Town, goalkeeper Jayson Leutwiler will make his Canadian debut. After a year’s worth of paperwork, the former Swiss youth international’s bid to change national allegiances has been granted. Simon Thomas is also back with the squad. Borjan will still be considered the No. 1 going forward, “but we need to push people like Milan, we need to push all our positions,” said Findlay.

It was the Koreans who approached Canada about playing this friendly. The South Koreans have endured an erratic World Cup qualifying campaign so far; despite the presence of Premier League and Bundesliga regulars, they’ve lost to Iran and drew Syria, and only managed a narrow 3-2 win over Qatar at home. Four days after the Canada friendly, they’ll face Uzbekistan. Remember that Canada matched up against the Uzbeks earlier this year, so the Koreans believe that they can learn something from Findlay’s crew — even if a lot of of the players involved in that Canada-Uzbekistan match won’t be playing on Nov. 11.

But, because the Koreans have a key World Cup qualifier four days after the Canada friendly, Findlay expects a tough match from the “very well-schooled, organized and technically gifted” side.

“Our expectation is that they’ll start with their strongest squad to begin the match,” he said.