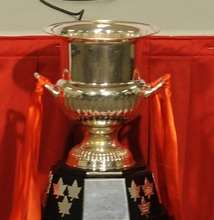 Even with the drama of what looks to be the most exciting, hotly contested Premier League season ever unfolding this weekend, the eyes of soccer fans never veer too far away from the FA Cup.

It is the most magical Cup tournament of them all; a chance for minnows from the semipro ranks and lower-division sides to test their mettle against the big boys in a series of do-or-die games. And, while we are still more than a month away from the likes of Chelsea, Arsenal and Manchester United joining the FA Cup fray, the second round of games this weekend provides for some fascinating displays from the fringes of English professional football.

On Saturday, Stevenage crushed the dreams of AFC Wimbledon, a small side launched by fans after Wimbledon left south London for Milton Keynes, Later on Saturday, FC United of Manchester, the fan-supported side started by fans driven away from Manchester United thanks to the debt-spending ways of the Glazer family, take to the pitch.

From hundreds of teams to the final at Wembley. The FA Cup takes the better part of a year to whittle down the field to two finalists.

Meanwhile, our Canadian championship will grow to four, count ‘em, four teams next year, with the addition of FC Edmonton. But the growth of the field from three to four teams will likely make for a shorter tournament, not a longer one.

While we are months away from finalizing the format for the 2011 Nutrilite Canadian Championship, we know this much; the chance of the Canadian Soccer Association going with a four-team full round-robin is nil. Under that system, each of the four clubs would need to play six games. There’s no time in either the MLS or NASL schedule to make that happen. Remember that a winner needs to be crowned before the summer, when CONCACAF needs the entrant for Champions League qualifying-round play.

So, what is the likely course — and what is on the table at the moment — is a simple knockout Cup tourney. The four teams would be seeded; TFC, as defending champ, would get the No. 1 slot, and would play the newbie, FC Edmonton. Vancouver and Montreal would play in the other series. The winners would face off in a true Cup final.

Once again, those first-round matchups are not confirmed, but, according to all of the whispers, this is how the tourney will run in 2011.

But, it’s a decent trade-off; we lose the round robin and the chance for supporters in four cities to see all of the major Canadian clubs at least once, but we get a real Cup final. And that’s what this tournament so desperately needed.

Last year, the round-robin finale between the Whitecaps and TFC was meaningless, as the Reds had already clinched the trophy. The last game of the series saw the Reds run out a bunch of academy players. The 2009 final was marred by controversy; the Montreal Impact, the lame-duck team of the three, decided to rest a cadre of regulars for its final game of the tourney against Toronto FC. The Reds, who needed to win the game by four goals to steal the title away from the Whitecaps, won by five, making for the one of the hollowest victories we’ve seen in Canadian soccer history.

But, this year, we will see a real final, even though it might only takes us a couple of weeks to get there from the opening of the first round. It ain’t the FA Cup, but at least we have some do-or-die games to look forward to in 2011.