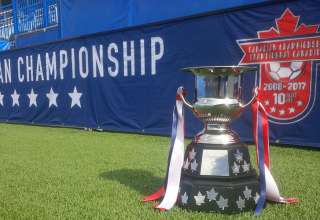 Even with the addition of League1 Ontario champs Oakville Blue Devils and PLSQ winners AS Blainville (OK, there’s the loss of FC Edmonton, too), the schedule for this year’s edition of our national soccer championship is a lot more fan- and media-friendly than it has been in previous seasons.

This year, the tournament starts in June, not in April like previous editions of the tourney. In previous years, despite some really harrowing matches, the tournament was widely ignored by media and mainstream sports fans because of the insistence to take this tournament head-to-head against the NHL playoffs. There were nights where the soccer teams had to try and find an audience with their local NHL teams playing on the same nights. It was a recipe for back-of-the-sports-section coverage and maybe time for one single highlight at the end of the sportscast.

Even though much of the tournament will conflict with the World Cup, it won’t matter much as that tournament won’t affect many of the rosters of the teams involved. The only issue is that some people may be oversaturated with soccer, but that’s still a better scenario  than going up against the most important part of the NHL schedule.

It’s a new format this year, with the Quebec and Ontario Division-3 champs playing a two-legged qualifier; the winner of that will play the USL’s Ottawa Fury. The winner of that round will be entered into the semifinals along with the three Canadian MLS teams.

This might be the only year we will see this format, as the Canadian Premier League launches next year and eight to 10 new teams (based on the projection of CanPL commissioner David Clanachan) will likely join the fray, finally giving Canada what feels like a real, multi-round Cup competition.