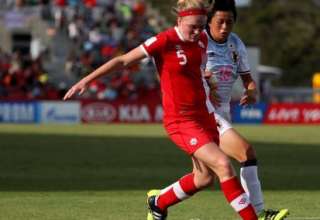 Before the first half of Sunday’s group-stage match between Canada and Japan at the U-20 Women’s World Cup was over, the FIFA international feed commentator had already resorted to coming up with consolatory terms for the team in red.

It was that bad. In the end, Canada lost 5-0 to a Japanese team that showed a quality of mercy in the final 15 minutes, slowing down the pace when, really, it could have gone for more goals. There were goals off set pieces. Goals off clever passing pays that cut through the Canadians. There was a clever back-heel flick goal. There were long spells of Japanese possession and off-the-ball runs that destroyed any semblance of the Canadian team’s shape.

Canada did get two good chances to score (while Japan had at least a dozen, according to FIFA, final goal attempts were 23-3 for the Japanese). Sarah Stratigakis had a wide-open headed chance in front of the Japanese goal which she put too close to the keeper, and Victoria Pickett slipped and sprayed a shot wayward after she was put through on goal thanks to a clever ball from Vital Kats.

But, maybe if Canada would have scored, it might have inspired the Japanese to score 10.

Canada’s U20WWC is over. Three group stage matches, outscored 13-1 over those games. Even has this team had UCLA star Jessie Fleming on the team — which makes for an easy excuse —things wouldn’t have been a lot better. There was such a wide gulf in class between Canada and its opponents at this level, it would have been impossible for the addition of any single player to make it better.

What we saw was a systemic failure. Teams like Spain and Japan were comfortable on the ball against Canada, while the Canadians played panicked football. There was a lot of hoof-and-hope in the Canadian game. Sure, one could blame the heat in Papua New Guinea, but that was something that affected all the teams. Fact is, best way to beat the heat is to have a lot of the ball; chasing it takes a lot out of you. And, boy, did the Canadians chase.

After the finale, senior national team coach John Herdman said this in a release provided by Canada Soccer. “Canada Soccer’s Excel philosophy is not geared towards only winning tournaments, but rather towards developing individual players to meet the future needs of Canada’s women’s national team. The program has proven successful in developing many of our current bronze medalists, and we see great things coming from the next group. It’s an approach that develops players by design to meet future positional openings as the team senior team evolves.”

So, it was nice way of saying that player development trumps results at this level. But, even with that philosophy in mind, it’s hard to find those positives other than thinking, well, this team was thrown in at the deep end.