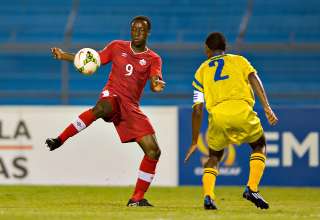 There’s an old sports adage that tells us that we shouldn’t criticize the wins.

But, for Canada’s U-17 team, the 3-1 win over Saint Lucia Monday at the CONCACAF U-17 Championship in Honduras comes about as close as we can get to the win that you’re not 100 per cent happy about.

Canada went into the game tied on points atop the Group B standings with Mexico, but trailed El Tri by five on goal difference. To improve the odds of winning the group, Canada didn’t just need to beat Saint Lucia, but throttle the islanders. Daniel Sagno, Duwayne Ewart and Ballou Tabla scored for Canada in a game it expected to win by more than two.

“I think there was an intensity level we didn’t have and I don’t understand that,” Canadian coach Sean Fleming said after the game.

“Any time you’re putting on the jersey for your country, there should be no question that you’re ready to play and it doesn’t matter the opponent. We respect Saint Lucia in our preparations and everything, and the players started being more individuals and that hurt us a little bit. We really have to go and look at things and get better if we’re going to move on in the tournament.”

What made the, ahem, result hurt even more was the fact that Mexico was only able to beat Haiti 2-0. The door was open for Canada to make up the goal difference.

Now, Canada and Mexico have just one last group-stage game left. The Mexicans play Costa Rica, while Canada plays Panama, who was just eliminated from contention.

The Costa Ricans can still win the group if they beat Mexico and Canada does not beat Panama, so it’s easy to see they’ll put their best feet forward. How Panama will react to its final game will be interesting to see. ??The winner of the group gets automatic passage to the U-17 World Cup. The second- and third-place finishers go into a four-team playoff pool with the second- and third-place finishers from Group A. The two winners of those playoff matches will qualify.

Canada is guaranteed at least a playoff spot.