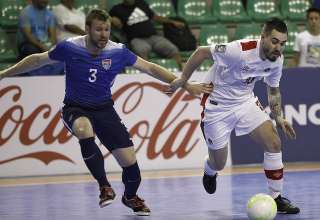 When the Canadian national futsal team began its preparation for a run at the World Cup, a message was put up: “It’s hard to beat a person that never quits.”

When the underdog Canadians went down 3-0 in the first leg of their CONCACAF Futsal Championship qualifier against the United States, they referred back to that motto.

“Step by step, shift by shift, we’ll get back into this,” said coach Kyt Selaidopoulos from Costa Rica Sunday morning. “This is a group that leaves everything on the floor.”

So, the Canadian came back to tie the first leg, 4-4, then won the second leg, 5-3, powered by a hat trick from Robert Renaud. The Canadians, with just three Major Arena Soccer League pros on the roster, eliminated an American team that was almost entirely professional. True, the pros in question play the arena variety of the game, but they have transferable skills when it comes to playing on a quick, flat surface and positioning.

“Of the teams we will face, Costa Rica should be the toughest team in the group,” said Selaidopoulos. “They are the defending champion. Curacao is a little country that has done well in the past. And Cuba is another country that’s getting established in futsal. They’re investing in it.”

“We have achieved step one,” said Selaidopoulos. “Step two is getting into the World Cup. Step three would be winning the (CONCACAF) championship. We are taking this step-by-step. The guys are all focused on the short-term right now.”

If this team – made up mainly of amateurs from Ontario and Quebec — goes on a run in Costa Rica, it’ll be interesting to see how this story is picked up back in Canada. Everybody loves an underdog story — and it’s one that could feature some Canadian protagonists.