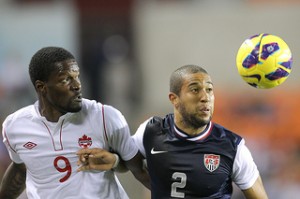 At a time when the Canadian senior men’s team is trying to regain some of the momentum it lost on that fateful day last October in San Pedro Sula, a scoreless draw by a makeshift Canadian side against a team largely made up of MLS regulars will go down as a good first step.

Facing a near-constant American attack, the Canadians held on and came out the other side with a 0-0 draw in Houston, what is seen by the group as a more than satisfactory end to its January camp.

Though the Canadians gave up 11 shots compared to their four, only two American attempts were on target with Simon Thomas picking up his first clean sheet for Canada in his first start.

If anything, Dwayne De Rosario had the best chance of the game when he blasted a left-footed attempt at goal that American goalkeeper Sean Johnson punched away.

“I’m pleased by the attitude,” said De Rosario, who wore the captain’s armband after Terry Dunfield had the honour on Saturday in Canada’s 4-0 loss to Denmark. “The improvement we’ve made in the game in such a short turnaround was really refreshing to see. It’s one game. It’s one good result and hopefully we can continue to build on that.”

Heading into the game the dread was certainly there that it was going to be a long night against an American team that featured players fighting for inclusion in Jurgen Klinsmann’s squad for next month’s World Cup qualifier in Honduras.

And after De Rosario’s initial chance, the Americans moved into the ascendancy.

Eddie Johnson fired a cross from the left that could have caused some trouble but he had no teammates on the other side and in the 28th minute, Chris Wondolowski had his shot from 25 yards out smothered by Thomas.

The Canadians certainly were given a lot to deal with but, while the Americans had to bulk of the possession, they really failed to deliver much in the way of clear-cut chances.

“It might not have been the silkiest performance at times but I’ll tell you what if we were going to give a goal away tonight it was going to be through a mistake,” said interim head coach Colin Miller, his voice hoarse after the game. “I thought tonight our players showed everything about a Canadian football team that we would expect in terms of heart, commitment, endeavour, everything.”

For Miller, Tuesday’s game was a moment to be proud as the result spared him the onerous tag of having coached five games for Canada and seeing his side lose them all.

In 2003, Miller coached the Canadian side in tough tests against Finland, Ireland and the Czech Republic and heading into this camp few would have given him and his team any chance in the two games against the Danes and the Americans.

“That’s what I’ve told the guys. That’s my first point in five games,” he said with a massive grin imprinted on his face. “I’m so proud to get a good result. It means the world to me. I’m very proud of the players. They’ve been totally committed since I’ve arrived.”

Barring anything unforeseen, it will be a new man in charge with likely a much different team for Canada’s next game in Qatar in March against Japan — but for a camp that was expected to be about getting experience and developing some depth that Canada has been lacking for a very long time, there is certainly something to be optimistic about.