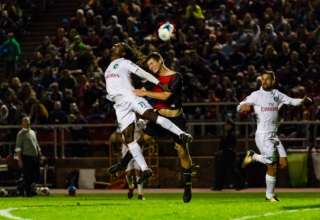 The San Francisco Deltas’ home strip, black with a big red vertical stripe down the middle, kinda looks like those black Canada jerseys the national team sported in the Eddy Berducso era.

All the better for our unofficial Team Canada.

And, well, Team Canada did the business, beating the New York Cosmos 2-0.

The Deltas opened the scoring on a penalty from Tommy Heinemann (former Vancouver Whitecap, Ottawa Fury), who went to the spot after Jackson (former Toronto FC) was ruled to have been brought down by Cosmos keeper Jimmy Maurer.

The Cosmos players and coach Gio Savarese were apoplectic over the penalty award, but it needs to be noted that the sequence began when the Deltas intercepted a dreadful clearing attempt from Maurer. The Cosmos then had another chance to clear the danger, but instead presented the ball back to the Deltas.

Meanwhile, Attakora, who rushed back from knee surgery so he could play in the post-season, went down early in the first half, looked to be favouring his leg, limped off, but came back on and gutted out 65 minutes.

Keeper Romuald Peiser (ex-Ottawa Fury) was clearly favouring a bad back, struggled to get up after he went down to make saves, grimaced when he leapt for balls, but didn’t come out of the game. Lacking mobility, he willed his way through the game, and the Cosmos didn’t do enough to test a keeper who was clearly ailing.

Finally, it was Bekker’s time to cap what has been a massive comeback year for the former TFC, FC Dallas and Montreal Impact man; deep into stoppage time, he cleverly nudged a ball past Maurer and into the path of teammate Devon Sandoval for the insurance goal.

Tissot, Ouimette and Bekker all played the 90.

The NASL is battling the USSF in American court for its very survival. The Deltas played a wonderful season that the Bay Area widely ignored, though a crowd of nearly 10,000 for the final made for a rather ironic swan song. The Deltas were not part of NASL’s team list for 2018 when it made its sanctioning application to the USSF.

But, on this night, they brought Canada some glory, however unintentionally it was done.

To think, Dos Santos could not have built the Deltas roster the way he did without the NASL’s decision before this season to make Canadians count as domestic players on the rosters of all teams, not just the Canadian one.  That move allowed Dos Santos the freedom to bring in Canadians without penalizing his international roster count.

When he arrived in San Francisco, Dos Santos made  a three-year agreement to steer the Deltas. Now, unless there is some sort of Divine Intervention, he’ll be looking for work as of mid-November. But, the NASL’s coach of the year really shouldn’t be in any sort of trouble to find a new job.