February 08, 2023
9 New Articles
Home Global Game Europe Canada will play for bronze; national team shoots itself in the foot in loss to Germany 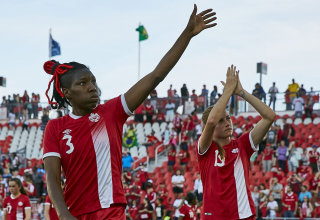 In the end, a very good run by the Canadian team was undone by two errors. After winning their first four games of this Olympic soccer tournament, things went sideways for Canada awfully fast.

Kadeisha Buchanan made the rash decision to try and dive in to take the ball away from German attacker Alexandra Popp, and there was never any choice for the referee to point to the spot. Buchanan got nowhere close to the ball, but came right through Popp’s legs. What made it all so much worse is that Popp was barely in the penalty area, and was actually running away from goal when the foul was committed. She presented only the slightest of dangers, but the chance was turned into a penalty kick, which Melanie Behringer dispatched with great power.

In the second half, Sara Daebritz hit a low drive that made it 2-0; but it was painful to see Canadian keeper Stephanie Labbe beaten at her near post. It would have taken a stretch to get to the shot, but Labbe was late getting over; giving herself really no chance to get to the ball.

These were examples of how cruel the game can be; it’s hard to argue that this team wouldn’t beat the 2012 version of the Canadian women’s team, all things being equal. Canada was more impressive in 2016’s group stage and quarter-final than it was in 2012. Yet, the Canadian women will play for that same bronze medal.

In 2012, Canada was undone by fate, controversial refereeing and an American team that refused to quit — and pulled out all the stops to win, even if it meant tossing sportsmanship by the wayside. In 2016, let’s face it, Canada beat itself. Two goals were neatly gift-wrapped for the Germans.

Meanwhile, Canada had golden chances to get itself back in the game. Buchanan’s headed effort was cleared off the line. Diana Matheson had a chance in alone — it was almost as if she had too much time; German keeper Almuth Schult outwaited her and made a good save.

And, early in the first half, Janine Beckie had the chance to give Canada the lead off a cross from Ashley Lawrence, but her effort went wide. To be fair, had it been on target, Schult looked to have it covered.

It was frustrating, because this wasn’t like matches we’ve seen against top-tier teams in the past, where Canada is badly outgunned. This was a case where Canada traded punches with a team ranked second in the world. But, when Canada wasn’t throwing punches, it was shooting itself in the foot.