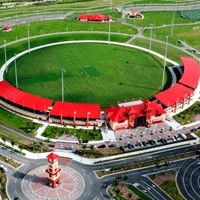 The cricket/soccer venue at Broward.

Canada will be playing Trinidad and Tobago in an international friendly on Aug. 15.

The venue? A community park in Fort Lauderdale, Fla. on a field that’s also used for cricket. The Central Broward Regional Park (CLICK HERE) will be the venue, where Canada will in play in an enclosed stadium next to playgrounds, swimming pools, a splash park and a lake filled with pedal boaters. To be fair, it is the largest cricket facility of its kind in the U.S., and can hold 5,000. (Addition: The venue is also used for MLS combines and PDL play)

Still, it certainly wasn’t Canada’s first choice of venue: In a conference call Thursday, national-team coach Stephen Hart said that the original plan was to go to Lockhart Stadium, home of the NASL’s Fort Lauderdale Strikers, and be part of some sort of soccer doubleheader. But that didn’t work out — and the facility ended up not being available.

Why play the game just outside of Miami? As Hart described it, the mid-August friendly date is “the most-hated date on the FIFA calendar.” A lot of European-based players open their regular seasons the weekend before, and many have games the weekend after. It’s only a 72-hour window, so there really is no time for training.

“The goal is to get everyone in and out fast,” said Hart. “(Hosting the game in) Trinidad didn’t sort of work out.”

The Canadian Soccer Association said the game will not be open to fans — but the game is being held in a public park.

Canada’s next World Cup qualifiers see Les Rouges face undefeated Panama… twice. While Canada plays in Florida, the Panamanians will head to Portugal for a friendly against the Euro 2012 semifinalists.

And while Hart maintained the Canadian side will be “balanced,” he did say he would look at some players who needed some experience internationally, hinting that the team he’ll utilize for the friendly against T&T might not be close to what he’ll use for the September qualifiers.