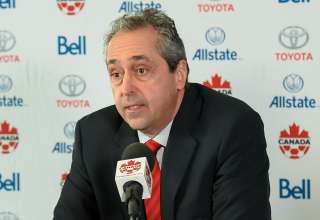 In the eyes of Canada Soccer, the United Bid to host the men’s  2026 World Cup and Calgary’s interest in hosting the Winter Olympics in the same year aren’t competing with one another.

In fact, bidding on both events for the same year is a plus, said Canada Soccer General Secretary Peter Montopoli.

He said that, 14 months ago, Canada Soccer officials met with Sport Canada and the Canadian Olympic Committee.

“We are reached a point where we decided that it was not a competitive landscape,” said Montopoli. “In fact, it’s complementary.

“It’s not a conflict and (the Calgary Olympic process) is not a concern for Canada Soccer.”

Calgary is still mulling whether or not the city will bid for the 2026 Games. The United bid for the World Cup, which would see the United States hosting the majority of the games and Canada and Mexico getting 10 matches each, will be submitted to FIFA by the March 16 deadline.

Montopoli said there is no conflict between Olympics and World Cup because the financial commitments aren’t comparable. Preliminary budgets for a Calgary Olympics are in the billions — but, with existing infrastructure in place, the World Cup host cities were each predicting budgets of less than $75 million each to host games.

“We see the World Cup as sustainable and affordable because we only have a piece of the competition,” said Montopoli.

Morocco is also planning a World Cup bid, emphasizing that games held in the North African nation would in a time zone friendly to the coveted European TV audience, and that the stadiums would be closely connected by high-speed rail connections.

Montopoli’s public pronouncement that a Calgary bid doesn’t conflict with the United World Cup process is a necessary one. The issue of a conflict came up in Edmonton, one of this country’s four finalist host-city candidates. Edmonton City Council was presented a risk-assessment report from administration which identified a potential Calgary Olympics as the biggest threat to a World Cup host city.

Montreal, Toronto and Vancouver are the other three Canadian host-city candidates. All four cities have affirmed their commitments to host World Cup matches in 2026. If the United bid is successful, FIFA will select the host cities based on what’s best for the tournament. When the City of Vancouver discussed going forward with being a potential host city, its documents indicated that there was an obligation to have games in both Eastern and Western Canada.