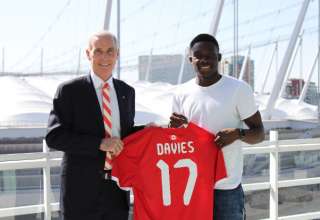 The timing was impeccable. On the same day that Canadian national-team coach Octavio Zambrano revealed his 40-man provisional roster for the upcoming Gold Cup, came news that Edmonton-raised teenage phenom Alphonso Davies has got the citizenship test out of the way and will have a Canadian passport very soon. And, that means Davies can wear Canadian colours in an upcoming “A” tournament, which means that all of us who were fretting about cap-tying the teen are just a little bit closer to breathing easy.

(Wait, who am I kidding? If you support Canada, you have forgotten how to breathe easy.)

Zambrano will whittle down the 40-man long list to a 23-man roster after Canada plays Curacao on June 13. Canada will open its pre-Gold Cup training camp June 28 in Ottawa.

“There is a motivation that Canadian players must have — the pride and the passion — in wearing the Canadian shirt,” Zambrano was quoted in a Canada Soccer release. “It is not a shirt that can be given to just anyone, it is something that players need to earn and, once they put it on, they need to feel something different.”

The Montreal Impact placed five players on the roster, including returning veteran Patrice Bernier. The Whitecaps have four, but that shoots to five if you count Sam Adekugbe, on loan top Brighton Hove & Albion. Toronto FC have three on the roster. FC Edmonton has two, and Ottawa Fury failed to get a player onto the 40-man list.

The NASL’s San Francisco Deltas, who have four Canadians on the roster, were also shut out.