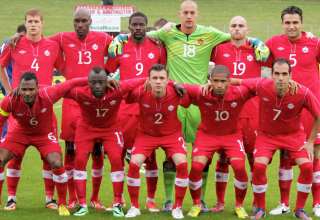 I woke up bright and early this morning (had a TV appearance, so I was up and at ‘em at 6 a.m.) and, before heading out the door, checked to see if the Canada-Moldova friendly would be available anywhere online.

I always check the opposing nation’s official site first; it can often give you some leads on whether or not the game will be broadcast in that country. And, lo and behold, the Moldovan Football Federation had this message for all to see — that the Canada-Moldova game would be webcast live via UStream, through the MFF site. I Tweeted it out and was surprised by the amount of retweets, especially by my followers in the West. Like, what time do you people get up?

The stream, coming from what appeared to be a secret Austrian location, fired up right before the national anthems. I was treated to an RBC ad in French. Then, a bit of “O Canada.” Then, the Blue Spinning Wheel of Death. The feed reloaded. The RBC ad again. The blue wheel. Wheel. RBC. Wheel. RBC. Occasionally, the feed would get to point where it would play the whole ad, and I’d see shot from the game, and background chatter that sounded like the kitchen at a really good party. Then, the blue wheel again.

But, thanks to Twitter, we learned that Moldova had gone up a goal just six minutes in thanks to Eugen Sidorenco, who plays his club football in the Russian second division.

Then, came the Twitter chatter of a Canadian goal. There was discussion on whether it came from open play. Then came the confirmation: Tosaint Ricketts had scored after a corner. Andre Hainault headed the ball into the danger area and Ricketts finished.

So, after eight minutes, it was 1-1. And, more importantly, after going 14 months without a goal, the Canadian national team had scored in two consecutive matches! For the next 80-plus minutes of game time, Canadian soccer supporters waited for news of another goal. It never came. But the repeated RBC ads and spinning blue wheels reminded us that the game was still on.

We can hope that Canada can build off the 1-1 draw against Bulgaria and today’s result against Moldova. Every result gets us closer to getting better friendlies in the future. Games that actually might be televised domestically. Because, there are people who are going to go to hear that damn RBC ad (en français) in their sleep.