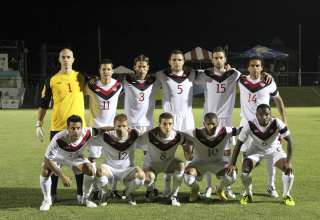 The Canadian men’s soccer team took the step it was expected to take, winning Group D in the CONCACAF second round of qualifying for the 2014 FIFA World Cup.

Needing just a point, Canada did the bare minimum Friday night and came away with a 0-0 draw with St. Kitts and Nevis, the only team that could have caught the Canadians.

Playing in front of what was a very impressively loud, boisterous and passionate crowd at Warner Park on the northern edge of downtown Basseterre, the home side was obviously up for the encounter while, after some early chances in the first few minutes, Canada didn’t look up for the challenge.

“I think the first 10 minutes we knew St. Kitts was a fast team and they work hard,” midfielder Jonathan Beaulieu-Bourgault said. “Sometimes we had a couple of problems but those games happen. We just have to keep our head up and be prepared for the next round.”

Beaulieu-Bourgault was a surprise starter in midfield, as was moving Adam Straith to the right side of defence after he played at centre back for the previous two games.

Canada looked solid early as the passing did look sharp, but as is often the case the chances went missing as Simeon Jackson, Josh Simpson and Dwayne De Rosario all failed to put chances away.

Jackson had a few chances right at the end of the game but Akil Byron stopped the Norwich City striker twice. It can only add more frustration for a player seeing only spot minutes with his English Premier League club.

“He couldn’t put it away and that doesn’t do a lot for his confidence,” Hart said. “We’ve been trying to show confidence in him. Today he played in a position that he’s most comfortable but he was not at his best finishing-wise.”

To its credit, St. Kitts had pace to spare which really limited some of Canada’s potency but you feel if Canada had converted one of the early chances, the game would have taken on a completely different complexion.

Canada’s next round is likely to start in June. It will be in a group with Honduras, Panama and Cuba.

Of course, there still is one final game to play. Tuesday at BMO Field, these sides play in the return fixture and while it was hot and muggy in Basseterre, the Kittians will be in for a surprise when they step into Toronto in November.