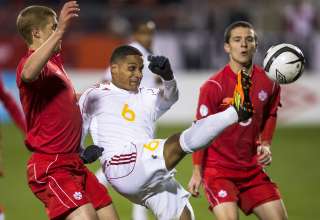 It isn’t often that Canada feels hard done by after a 3-0 victory, but given the bizarre circumstances surrounding Friday’s CONCACAF World Cup qualifier against Cuba, three goals seemed like the bare minimum that Canada could’ve scored against an overmatched Cuban side.

Canada outshot Cuba by a 35-14 margin (including 14-1 in shots on goal), a dominating but oddly frustrating performance that left the Canadians disappointed at their lack of finish. Given the tight circumstances of the qualifying group, every goal was critical for a possible tiebreaker scenario.

“We could’ve at least scored seven goals today, we had so many chances,” said Atiba Hutchinson. “There could’ve been a lot more. Players kind of had their heads down a little bit because we know we could’ve had more goals.”

Before the game even began, news broke that Cuba’s roster had been decimated by player defections. Cuba head coach Alexander Gonzalez confirmed that he brought 15 men on his roster but only 11 were dressed, leaving the Cubans with an empty bench for the game. Of that remaining Starting XI, only three had started in Cuba’s four previous games in the qualifying round, meaning that Cuba was sending a veritable C-squad into action against the Canadians.

“As with any Cuban sport team that travels around the world, they’re all chasing the American dream. To try to keep the team together, it’s difficult,” said Gonzalez through a translator. “If FIFA would allow these players to play in other leagues, perhaps this wouldn’t happen in the future. It can affect the sport in different situations.”

It was the latest blow for an 0-4 Cuba side that was pointless and scoreless through their opening four games in the tournament. The talent gap was apparently from the opening minutes as Canada just overwhelmed the opponents with scoring chances. As it so happened, the Canadians were in the dark about their advantage given that head coach Stephen Hart didn’t tell the players about the situation with the Cuban defections.

“I thought it was better the players didn’t go into the game thinking ‘let’s just go helter-skelter in the first half and score a lot of goals’ since in my experience that’s when you make the most mistakes as a team,” Hart said.

While Canada didn’t concede any scores, “helter-skelter” was a good way of describing the barrage that faced Cuban goalkeeper Odelin Molina in the first half. Canada broke through in the 14th minute when fullback Ante Jazic sent a cross from the left side to the front of the net, where it was touched by Simeon Jackson over to Tosaint Ricketts for the conversion.

It was an important strike for Ricketts, who was one of three changes (along with Will Johnson and Olivier Occean) made to the Starting XI from Canada’s last game, on September 11 in Panama. The trio replaced Marcel De Jong, Patrice Bernier and Dwayne De Rosario, who was out with a sprained MCL suffered in that Panama match.

Then again, even a one-legged De Rosario could’ve found success against Cuba’s lacklustre defence, as Canada essentially struck at will in the first half. Despite all their chances, however, Canada couldn’t find the back of the net. Partial credit goes to Molina for some big saves, but Canada were also their worst enemy in terms of getting too aggressive with their open space and making sloppy errors.

“I don’t think I’ve been involved in a game with a Canada team where we’ve had that many chances, especially in the first half,” Hart said. “I thought we got a little carried away and lost our shape a little bit. but overall, I’m happy.”

The sloppiness leaked into the second half as well, leading to a couple of tense moments when it seemed as if Cuba might, against all odds, equalize the game.

“I think we began to doubt ourselves a little bit, maybe lose a bit of discipline,” Hart said. “In the second half we started to get it right, moved the ball much more patiently and sort of tried to open them up and take our chances.”

After Canada had weathered this minor storm, Cuba short-handed themselves even further when midfielder Robert Linares was shown an immediate red card for his elbow on Andre Hainault. It took less than two minutes for Canada to take advantage, as Johnson converted a ball in from the right side.

Even that goal came with a dark cloud, however, as after Molina shoved Johnson while the midfielder was taking ball out of the net, Occean shoved Molina in defence of his teammate and received a red card of his own. Occean will now be suspended for Canada’s forthcoming match against Honduras on Tuesday, leaving the team yet another striker short.

With the game now 10-on-10, Canada notched one final strike. Jazic was a force down the sidelines all game and he showed his quality again on a tremendous cross from the left side to David Edgar, who blasted the ball into the net for Canada’s prettiest goal of the night.

Canada takes temporary custody of first place in Group C, pending the result of Friday’s Honduras/Panama match. Panama is still in good shape even with a loss because it seems set for an easy three points when it faces Cuba on Tuesday, which would send Panama through to the final CONCACAF qualifying round. That sets up Canada and Honduras to square off in San Pedro Sula on Tuesday to see who receives the second qualifying spot out of the group.

“We’re 90 minutes away from the Hex and that’s a great feeling,” Johnson said. “That’s an opportunity that’s there for the taking. We haven’t had that opportunity many times.

“Five games and 20 points, it’s pretty impressive. It hasn’t happened the last two cycles. When you get in this position you always want more. I think it’s human nature to get greedy, you always want to be in a better position. If you said at the beginning of this round that we’d have 10 points from five games we’d be quite pleased with that.”