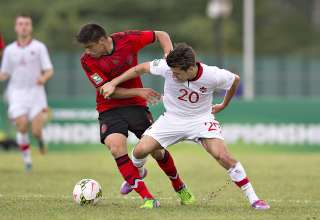 You would have to forgive Canadian fullback Sam Adekugbe if he has a few nightmares on Monday night.

Adekugbe was given the thankless task of trying to mark Mexican forward Hirving Lozano, who loves to lurk on the right wing. And Lozano burned the Canadian time and time again as the Mexicans triumphed 2-0 in group stage play at the CONCACAF U-20 Championships in Jamaica.

The loss drops Canada to 1-1-0 and the goal difference is even.

But, make no mistake, even though Canada had a few scattered chances on counterattacks, the 2-0 scoreline flattered our boys. Had the Mexicans wore their shooting boots — and if goalkeeper Nolan Wirth hadn’t put on a Canadian man-of-the-match performance — the scoreline would have been (deservedly) more severe.

Let’s get back to Lozano. If you were a neutral, his performance was something to see. Lozano shows how far we still have to go in Canada to develop players. Before the tournament began, Canadian coach Rob Gale lamented how few of his players had played meaningful first-team minutes at a professional level. And, on Monday, the Canadians had to try and stare down Lozano, who already has played 17 Liga MX matches this season for Pachuca.

Lozano had two glorious chances early, one on a rebound from a Guillermo Martinez shot, another after beating Adekugbe and cutting into the box. Adekugbe was simply run ragged by Lozano, who won ball after ball and was able to get behind the fullback with alarming regularity. There were changes of pace, great two-footed play and composure on the ball.

And, when Lozano finally struck, it was his sheer athleticism that won out. A long ball was launched down the right wing; Adekugbe waited for it to fall. Meanwhile, Lozano, smelling blood, charged hard and timed his leap perfectly. In the air, he cut in front of Adekugbe, won the ball cleanly, and left the defender flat-footed. Lozano cut to the middle of the box and then fired a shot against the grain, smashing the ball inside the near post. It was ballet on the rough dirt that passes for grass in Jamaica.

Lozano’s influence on the game dimmed in the second half, but the Mexicans still kept the Canadians pinned in their own half for most of that stanza. But, after a gathering of four Mexicans in the box could only muster a blocked shot on goal, Canada got a break. Michael Petrasso was played through, and his shot flashed just inches wide of goal.

It would represent Canada’s best chance of the game. The Canadians were outshot 17-6; the Mexicans had a 10-0 (10-0!) advantage in corner kicks. But, the Mexicans fluffed several golden chances in front of Wirth.

With Mexico having such a territorial advantage, the Canadians couldn’t afford to mess up their best chance of the game. But they did.

And, when the injury-time insurance goal was scored by Diego Pineda Juarez, a result that had seemed inevitable from the opening kickoff was sealed.