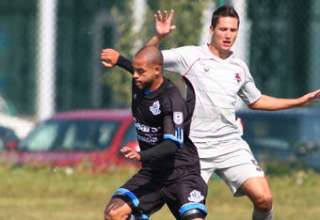 Kyle Porter in action against Atlanta

FC Edmonton’s coach is taking the reins of the national side for a Jan. 26 date with Denmark in Tucson, Ari. and a Jan. 29 clash with the U.S. in Houston. He then reports back to FC Edmonton in time for the NASL combine.

While mainstays such as keeper Lars Hirschfeld and Canada’s all-time leading scorer, Dwayne De Rosario, are on the roster, Miller also gave nods to Philippe Davies, who spent last season in the USL, and Kyle Porter, who spent two seasons in the NASL.

The average of the team is 25.

If there is any one spot on the roster where anyone would question the division of Miller’s loyalties between his club and country, it’s the decision to include forward Kyle Porter in the squad.

Officially, Porter is one of five unattached players Miller has called into team, as the forward has yet to accept a new contract offer from FCE. Miller has previously confirmed (CLICK HERE FOR THAT STORY) that the Eddies have given Porter, who has scored 12 times over the last two NASL seasons, a deadline to sign the offer, or else the club will move on without him.

Miller admitted that most of the team “was picked for me prior to my announcement (as interim head coach). I partly inherited this group.” But he stressed that the decision to bring in Porter was his.

“He’s a good player. He was the last cut from the Olympic team… I know he’s desperate to play for his country,” said Miller.

With that in mind, he said it was easy to keep Porter’s contract issues with FCE and the needs of the national team “completely separate.” Miller said he was thinking of getting Porter the invitation “long before the contract side of things” emerged at the club.

Miller said many players weren’t available for selection. Midfielder Will Johnson is settling in with his new Portland Timbers mates. Youth stars Lucas Cavallini and Samuel Piette were left alone due to respect for their clubs in Uruguay and Germany. Miller said those players are either close to finding new clubs or breaking into first-team football.

Because so many players are out of contract and are auditioning for clubs in the January transfer period, Miller admitted for many it’s a choice between the country or paying the bills.

“I’ve been there myself,” he said.

The agent for goalkeeper Tomer Chencinski confirmed his client had been called by Canada, but was unable to come to the U.S. for camp. Chencinski just signed with Maccabi Tel Aviv and is settling in with his new club.

As for the unattached players, such as former Huddersfield goalkeeper Simon Thomas, ex-Impact midfielder Evan James (who, by the way, is Porter’s best friend), Mason Trafford and midfielder Jonathan Beaulieu-Bourgault, the games could be a way to get their names out there — especially to MLS and NASL teams that will be in training-camp mode in February. It’s a chance for them to show clubs, as Miller said, that they can “do the simple things right and show the right attitude.”

But, as Miller inherited most of the roster, he admitted that “there are guys I genuinely don’t know.” And the first days of camp will see him tested in remembering names.

But there are veterans on the squad . And Miller wants the young players to look up to Hirschfeld and De Rosario.

“It will be good for young players to see (De Rosario’s) movement on the field and the quality he has on set pieces,” said Miller.

And keepers Roberto Stillo and Thomas can apprentice under Hirschfeld.