January 28, 2022
9 New Articles
Home Global Game CONCACAF Canada loses to the United States, again. Or did we win? No, we lost. Or, did we? 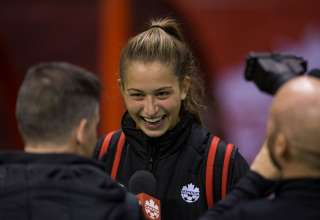 If you didn’t live through the 90 minutes, Canada Soccer has provided a fine highlights package that can help us all sleep well tonight. If you watch it, you’ll see that Canada didn’t lose 3-1 to the Americans Sunday night in San Jose; no, in fact we won, 1-0!

You’ll see that Christine Sinclair just missed a chance after an American giveaway, before she made a lovely pass up the wing to Nichelle Prince, who squared it to Janine Beckie for the winning goal. And you’ll see the ball squirt through Canadian keeper Stephanie Labbe, hit the post and stay out. Whew.

Now, for those of us who’d rather live in the real world, a place where the Canadian women’s team hasn’t beaten the Americans since 2001, there were some bits left out.

For starters, Julie Ertz beat Canadian fullback Allysha Chapman to the near post and slotted home Megan Rapinoe’s corner to give the Americans a 1-0 lead.

Soon after Beckie equalized in the second half, the Americans got the lead, taking advantage of a series of mistakes from Canadian midfielder Jessie Fleming. Deep in her own half, Fleming decided to try and take on two American players who were pressing her. Instead of finding help or simply hoofing the ball out of danger, she foolishly decided to try and play through the pressure and, predictably, she lost the ball. Christen Press pounced on the turnover and slid the ball into the penalty box for Alex Morgan, who gave the Americans a 2-1 lead.

Carli Lloyd made it 3-1 when she was in the right place at the right time to get the final touch on the ball. A cross from Rapinoe found a wide-open Morgan in the Canadian penalty area, and she simply nodded the ball into Lloyd’s path. It looked as if the Americans were able to translate a nifty training-ground play into game action.

Yes, Canada played a bunch of young prospects on Sunday. As a Canada Soccer reminded us in the heading of its post-game press release, “Canada sends signal to the world in U.S. series, playing six teens against world’s top team.” Yes, three 16-year-olds got to play for Canada on Sunday: Jordyn Huitema, Ariel Young and Jayde Riviere.  But not matter how experimental the lineup, I’m not sure of the “signal” being sent to the world is that “we have a lot of young players who are coming up for the next couple of cycles” or “Americans still are beating Canada.”

It’s harsh and, from all accounts, coach John Herdman was pleased with the Canadian effort on Sunday: “These women put in a shift tonight and I can’t say enough how proud of each and every one of them we are. We’ll take away some lessons from tonight and from the match in Vancouver, but I can honestly say we feel pretty good about what we’ve accomplished against this US team and there are no hung heads coming out of this camp.”