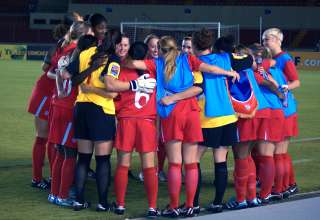 It was a blue Monday for the Canadian U-20 Women’s national team. Despite taking a 1-0 lead on undefeated North Korea in what was a must-win game, the Canadian team fell 2-1, and was eliminated from the U-20 Women’s World Cup after the group stage.

Coach Andrew Olivieri had said the team’s goal was to make the elimination rounds in Japan, but losses to Norway and North Korea — after a hopeful 6-0 triumph over Argentina in the opener — means that Little Big Red will be going home early.

Christine Exeter gave Canada the early lead. The striker made a clever turn in the box to free herself of a North Korean defender and poked a shot into the corner of the goal.

But the North Koreans were level before the halftime break. Kim Un Hwa scored her seventh goal of the tournament, a lofted effort over Canadian Sabrina D’Angelo after the North Korean attacker was allowed to sprint in from midfield and then cut across to the right side of the area, with no Canadian defender putting in a challenge.

The die was cast for Canada — who needed to win the game — when Yun Hyon Hi converted a penalty after Little Big Red defender Rachel Melhado was whistled for a trip in the penalty area. The Koreans, despite not really needing the win (by virtue of the fact they had already clinched a spot in the quarters before the Canada match) dominated the game. The North Koreans outshot Canada by a 17-4 margin. For full highlights, click HERE.