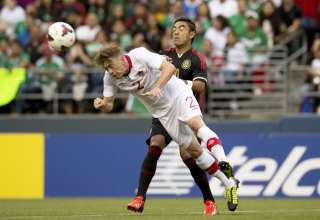 The last time Colin Miller saw someone dive to win a penalty in a high-profile game, he was kicked out of the match (and later fined) when Edmonton FC lost 3-2 in an Amway Canadian Championship semifinal game against the Vancouver Whitecaps.

This time, however, Miller was a bit more diplomatic as he saw Marco Fabian con his way to earn Mexico a penalty in their 2-0 win over Canada at Seattle’s CenturyLink Field.

“It’s not a penalty. I’m biting my lips here as hard as I possibly can,” Miller said, sporting a wry smile. “What I’m saying and what I’m feeling are two totally different things, I can assure you.”

Fabian’s penalty win that he then converted himself in the 57th minute, doubled the Mexicans’ advantage after they had taken the lead in the 41st minute on Raul Jimenez’s header off a corner kick.

Despite the result, it was a much better Canadian performance compared to Sunday at the Rose Bowl against Martinique when Canada conceded a last-second goal to lose 1-0. At a time that the Canadian program could use a sign that the next generation is headed in the right direction, Thursday night wasn’t a bad start.

“We finished the game with two 18-year-olds on the field, a 21-year old in midfield, and a 21-year old that we took off,” Miller said. “So the youth that played today learned a great deal and I am so proud of our players tonight.”

It was a loss on the scoreboard but there was one moral victory as Keven Aleman is now officially cap-tied to Canada after his 82nd minute introduction to replace Kyle Bekker in the midfield.

With Aleman eligible to play for Costa Rica, at least up until Thursday night, there were always the worries that he could be the next Asmir Begovic, Owen Hargreaves, or Jonathan de Guzman.

But no matter what now, Aleman will suit up for Canada for the rest of his career.

“If I didn’t think we would go forward I wouldn’t stay here,” said Aleman. “So I think that the Canada program is moving on well and the players that are staying are very good. I’m happy to stay on board and I’m just happy.”

There’s still a chance that Canada can sneak into the tournament’s quarterfinals but what it will take is a win over Panama on Sunday and a bit of luck.

Canada wilted under some pretty intense heat in Pasadena and while Thursday’s game was under much more comfortable weather in Seattle, it’s now headed to Denver where it’s right back into hot, sticky conditions. On top of that, the Canadian players will also have to contend with Denver’s famed altitude. It’s pretty much the literal representation of the uphill battle they face.

“I understand the temperature today in Denver was 35 degrees (C). That’s a little bit warmer than Seattle,” joked Miller. “So of course for us to go guns ablazing in that sort of temperature would be foolish but I the biggest thing is that we go into the game having played well and we have to carry that on.”

Unfortunately for Miller, Canada may have to face Panama without yet another offensive player as Marcus Haber limped off at the end of the first half and didn’t come back with a possible heel or ankle injury.

Haber had Canada’s best chance of the first half in the 29th minute when he got onto a Bekker free kick that forced Jonathan Orozco to dive to his right and force the ball out.

Miller said the staff would have a look on Friday but that Haber was in “some significant pain.”