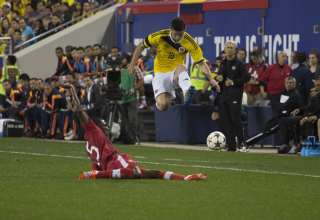 I get the feeling that a lot of Canadian soccer pundits’ work is going to come off like a lot of bad high-school-newspaper sports reports.

We have nothing to be ashamed of!

We lost, but we held world-ranked No. 3 Colombia off the scoresheet for 74 minutes! Seventy-four!

Losing 1-0 was a great learning experience for our boys!

I’m not trying to be mean. But, after Tuesday’s friendly between Canada and Colombia in New Jersey passed the one-hour mark still tied 0-0, I had hopes of writing the most flowery narrative to describe a nil-nil draw since the dawn of time. So, after James Rodriguez caught the Canadians napping on a quickly taken free-kick that ended up in the back of the net, I had to fall back on the high-school-paper cliches.

But, for today, it’s OK to do that. Because, really, let’s face it, we all went into this game fearing the worst. (OK, not the worst — losing 8-1 to Honduras was the worst) We were expecting the a game kinda like 2010, when Canada got whipped by Argentina in Buenos Aires. Canadian national-team coach was bringing a very young, experimental Canadian squad to New York to face a Colombian team that was starting its superstars. Falcao. Cuadrado. James Rodriguez.

So, there was a sense of justice when what looked like a perfectly legitimate Colombian goal was flagged for offside. After a wonderful combination of passes on the right side, Radamel Falcao slotted the ball into the corner of the Canadian goal. But, the linesman’s flag went up, and the Canadian were thrown a lifeline.

But, as the game went on, and the pro-Colombian crowd in New York grew more frustrated, the “home” team had lots of possession, but struggled to create clear-cut chances. In fact, Canada had another scoring opportunity broken up by a hand ball from Carlos Carbonero, but the Colombian defender showed his guile by clutching his face right away, fooling Guzman into thinking that the shot had come off the noggin. 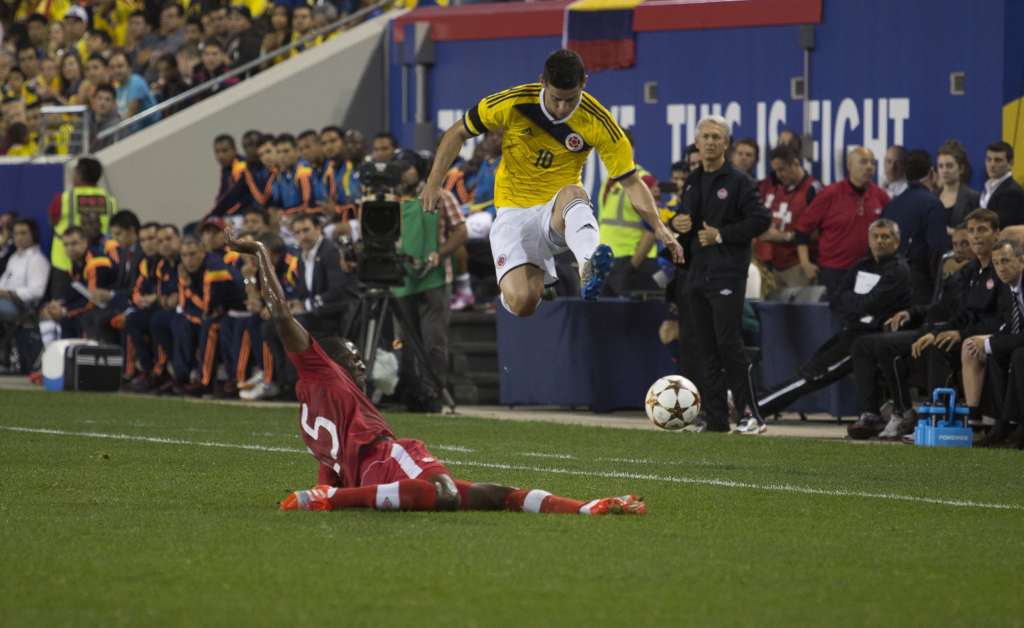 In the second half, the Canadians defended doggedly. Julian de Guzman, in the middle of the park, looked as if he’d turned back the clock 10 years. He continually broke up attacks and looked like a player in his early 20s. Andre Hainault selflessly laid out to block shots. Goalkeeper Milan Borjan made a wonderful diving stop on a Rodriguez free kick.

But, as Canada chased and defended, defended and chased, fatigue had to set in. And, we can blame tired legs — and tired minds — for the eventual Colombian winner. After a foul about five yards outside the Canadian penalty area, the Colombians decided to take it quickly, while the Canadians were expecting to take time to set up a wall. The ball came to Rodriguez, who fired it into the corner from 25 yards out. The Canadians fell asleep just long enough for Rodriguez to conjure something.

Floro made a flurry of late substitutions to bring on a cadre of young players — including Manny Aparicio, Jordan Hamilton and Cyle Larin. And Larin had a chance to snatch a late equalizer. He got the ball at the top of the box, and the Colombians backed off, giving the University of Connecticut striker a clear look at goal. But he didn’t get enough fizz on the shot get it past the Colombian keeper.

Coming on the heels of an impressive win over Jamaica, the Canadians will take the moral victory of holding the world’s No. 3 soccer nation to a 1-0 result. And, maybe, if Falcao and Rodriguez are too tired to really help Manchester United or Real Madrid this weekend because they had to play more hard minutes against Canada than they expected, well, that’s some kind of win, right?