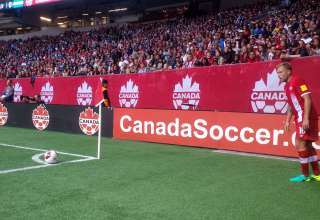 FIFA confirmed Tuesday that it has levied a series of fines and warnings to the Canadian Soccer Association due to poor fan and player behaviour during the recent series of World Cup qualifiers.

The fines levied against Canada were part of a long series of violations from national teams and their fans.

• Canada was fined 20,000 Swiss francs (about $26,850 CAN) and given a warning because of insulting chants from supporters during Sept. 6’s 3-1 win over El Salvador at BC Place.

• Canada was given a warning for coming out of the dressing room behind schedule and delaying the second-half kickoff of Sept. 2’s 2-1 loss at Honduras.

• Canada had already been fined 27,000 Swiss francs for a pitch invasion and insulting chants from supporters in March 25’s loss to Mexico at BC Place, and was fined 5,000 for illegal pyrotechnics in the BMO Field stands during a 2015 win over Belize.

As well, Honduras was fined 50,000 Swiss francs because of homophobic chants uttered by its fans during that Sept. 2 win over Canada in San Pedro Sula.

Mexico was fined a total of 33,000 Swiss francs because of homophobic slurs uttered by their supporters during both the away and home World Cup qualifiers against Canada.