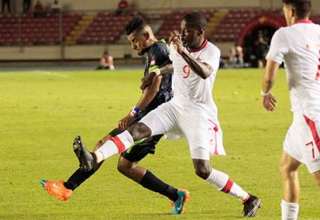 Tosaint Ricketts in action vs. Panama

If you were a neutral and stuck out all 94 minutes of Canada’s 0-0 draw at Panama, well either you really, really love soccer or you’re immune to boredom. You could sit through a Kenny G concert and be entertained.

Tuesday night’s game certainly wasn’t a masterpiece. It was a foul-filled, choppy affair, with really only two scoring chances of note. In the first half, Canadian keeper Milan Borjan leapt to stop a dipping left-footed volley from Anibal Godoy; in the second half, Borjan made an outstanding point-blank stop of a headed effort from Panama’s Luis Tejada. The Tejada chance came after Canada was caught defending too deep on a free kick into the box.

But, with 33 fouls called in the game — 20 of them called against the Panamanians — the game stuttered. Even though Godoy saw his second yellow in the 69th minute, the best Canada could do was an injury-time snatched shot from Tosaint Ricketts that went so far wide of goal, it’s a stretch to refer to it as a legitimate scoring chance.

Yes, the match was ugly. But, for Canadian soccer followers, they have to look at the silver linings. The fact is, when it comes time to qualify for the 2018 World Cup, a scrappy, ugly, boring 0-0 draw in Panama would be seen as a very good result for the Canadian national team. Heck, it’s a good result for anyone in CONCACAF. The secret to moving onto the hex, and qualifying out of the hex, is to scratch out points on the road — draws are fine — and take care of business at home.

Canada beat Jamaica in its most recent friendly on Canadian soil. After a 1-0 loss to Colombia in New Jersey, the Canadians got a draw in a Central American environment that’s usually a tough place to play.

Did Canada threaten the Panamanian goal at all? No. But it’s better to play the scrappy, tactical game rather than risk opening up the match, where the percentages favour the home team. This is important to remember: If you want to be entertained, watch club football. International football is about results — and the ends justify the means. Coach Benito Floro has said over and over that he’s hammering the tactical side of the game home. He’s smart enough to know that a coach who regularly can get 0-0 draws on the road in Central America is a coach who will get his contract extended.

And, as Canada’s form improves under Floro, we can all look to what looks to be a very special U-20 group to provide the offence needs in the future. The U-20s just finished a tour of Europe which saw them tie England, beat Russia and, on Tuesday, beat the Americans, 1-0. The likes of Jordan Hamilton and Hanson Boakai look to be legitimate offensive weapons for the future.

Despite the dastardly dull nature of the game, the Canada-Panama encounter offered lessons for the players and reminders for the long-suffering Canadian supporters. Playing ugly on the road is absolutely fine.