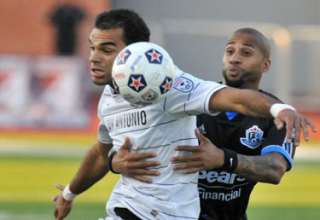 It should have been the perfect season for Pablo Campos.

As has been widely expected, the San Antonio Scorpions striker was named the NASL’s Golden Ball winner Wednesday. With 20 goals and five assists this season, he was head and shoulders above the opposition in the MVP race. The 11’s vote went to Campos. Heck, the league didn’t even need to bother sending us a ballot. It’s not like it was a difficult choice.

Campos led the expansion Scorpions to the regular-season title and scored the opening goal of their semi-final tie against the No. 6 seed Minnesota Stars.

It was all going so well, until the moment of madness.

Campos, frustrated, head-butted Stars’ defender Kyle Altman — and the Scorpions went down to 10 men. A man up, the Stars broke down the Scorpions, scored twice to win the semifinal and turn Campos from hero to zero.

So, instead of accepting the award as his team prepares for a shot at the Soccer Bowl, you can’t mistake the bittersweet feel of the award.