February 01, 2023
9 New Articles
Home Canadian Soccer Men's National Team Camilo, Camara or Felipe to the national team? According to the feds, citizenship will take a lot longer than five years 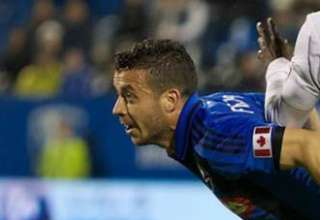 If players like the Vancouver Whitecaps’ Camilo and Gershon Koffie, along with the Montreal Impact’s Felipe and Hassoun Camara want to play for Canada as soon as they get their citizenships, Floro said he would consider them. Of course he would. Any Canadian coach would.

But, this is where it gets tricky. In a lot of places, it’s being reported that the players, once they are in Canada for five years, can play for Canada. That’s the FIFA regulation; that a player be in his naturalized country for five consecutive years. So, if these players make Montreal and/or Vancouver their permanent homes, that’s the soccer-body requirement.

FIFA, though, isn’t the most important part of the equation. To play for your country, you need to be a citizen. You need to have a passport. And Canadian citizenship isn’t that cut and dried.

And, really, in any story that’s written about the possibility of these players wearing the Canadian uniform, the first call has to go to Citizenship and Immigration Canada.

First off, to apply for Canadian citizenship, you need to have spent 1,095 days in Canada over a four-year period. If you hit 1,095 days after three years, you can apply.

So, to apply after three years, you can not leave the country for a single day (save for a leap year) as three x 365 days = 1,095 days. Did any of these players go home for a single day? Go on road trips or training camps to the United States? Of course they did. So they’d need to wait till they hit 1,095 days in a four-year period.

“All absences from Canada, regardless of the reason, must be declared. The only trips you do not have to declare are those where you left and came back to Canada on the same day.”

So, the likes of Felipe and Camilo need to be declaring the days they spend outside of Canada to someone at CIC. Are they doing so? If not, scrap those days from the 1,095. And,even then, a judge has to decide if those days count or not.

And this is the thing. You need to rack up 1,095 days to apply. Apply. That’s the key word here. You don’t just apply and then get your citizenship and passport. According to CIC, if there are no issues with your application forms (and not getting to 1,095 days would be an issue), the wait time for citizenship to be approved is currently at 25 months. That’s just over two years.

So, to get citizenship, 1,095 days over four years, plus a two-year waiting period.

Five years seems like a pipe dream, doesn’t it?

If there is an issue with the application, the waiting time shoots up to an estimated 35 months. Just under three years. So it’s not even worth applying without earning the 1,095 days, as the application takes another year to process.

There is one shred of hope for Canadian soccer fans.

From Lafortune: “Under subsection 5(4) of the Citizenship Act, the Governor in Council, may, at his or her discretion, direct the Minister of Citizenship and Immigration to grant citizenship to any person in order to alleviate cases of special and unusual hardship or to reward services of an exceptional value to Canada. A recommendation for this special grant of citizenship is only made in exceptional circumstances.

“Discretionary grants of citizenship are only used in very exceptional cases and each case is considered on its own merit.”

So, possibly, the Canadian Soccer Association could go to bat for these players, and state that they provide “exceptional value to Canada.” If that doesn’t happen, well, those wait times are awful long.

Anyone who has followed the saga of Mallan Roberts, knows how long citizenship can take. Roberts came to Edmonton from Sierra Leone as a refugee… 12 years ago. The FC Edmonton centre back has his permanent residency, but is still waiting on citizenship. It cost him a chance to play for Canada in the friendlies earlier this year, when Colin Miller coached the team. Miller publicly stated that he wanted Roberts on the team.

The lesson here is that the wheels move very slowly. And, without intervention of the “exceptional value to Canada clause,” no sane bettor would gamble on any of these Canadian “prospects” getting their passports within five years of coming to Canada.