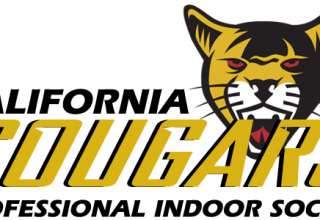 “I don’t have to lie to you, we needed this game big,” said California captain Nelson Santana.

The Cougars (3-9) currently sit in last spot in the Western Division of the Professional Arena Soccer League and with just four games left in the regular season, their playoff hopes are fading.

“We’ll go back and see if we can make it in the wild card, but also we’re building up for next season,” said Santana. “It’s one of those seasons. You’ve got to keep your head up and keep going.”

With the win on Sunday, United improved its record to 2-1, but Calgary still trails the 3-2 Drillers for top spot in the Canadian Major Indoor Soccer League.

“It’s a big win for us because they beat Edmonton last night, so it’s almost a four-point game,” said Calgary coach Troye Flannery. “We’re in a big battle with Edmonton and Winnipeg and we needed this one today huge and fortunately we came through.”

Things didn’t start well for the Cougars in Edmonton on Saturday night as Enrique Tovar inadvertently put the ball into his own net just 45 seconds into the game when he attempted a pass back to goalkeeper Jesus Molina.

In the second quarter, Tovar scored to make up for his mistake and to put California up 3-2. The Drillers then reeled off the next four goals to take a 6-3 lead before the Cougars replied with four goals of their own to go up 7-6.

The see-saw affair continued as Osomo Bimba scored for Edmonton to tie up the contest and send it to overtime. Exactly one minute into the extra frame, Jose “Cuco” Martinez fired a hard shot past Edmonton goalie Matthew Preston to give the visitors the win.

“He’s one of our first-year guys,” said California player/coach Antonio Sutton of Martinez, who finished the game with a hat trick. “I saw promise in him a long time ago. He’s come along really well and his game is starting to get more confident and more stable. He’s putting the ball in the back of the net consistently.”

Although they were supposed to play in Calgary at 3 p.m. on Sunday afternoon, the game didn’t get underway until after 3:30 p.m. because California’s team bus arrived late due to slippery road conditions and several accidents on the QEII Highway between Edmonton and Calgary.

Despite holding leads of 3-2 at the half and 4-3 after the third quarter, the Cougars couldn’t contain the hard-charging United in the final frame as Arthur Paszkowski scored twice, including the game-winner, to lead Calgary to victory.

“The United, they worked really hard and we knew coming in that it was going to be a battle,” said Sutton. “We put in a valiant effort.”

At the 1:45 mark of the fourth quarter Paszkowski knocked down a long pass from Calvin Campbell before firing a shot past Molina to tie the game 4-4.

After scoring to put the United up by one, Calgary captain Nicolas Reyes set up Paszkowski for what Flannery called a “highlight-reel goal.” Using his left foot, Paszkowski volleyed the ball out of mid air past a stunned Molina.

“I’m right footed, so that was sort of awkward for me,” said Paszkowski. “Nic just put it across for him,” noted Flannery. “He got his legs up and around it and he hit it pretty clean. It was spectacular, that’s for sure.”

After Jason Martin scored to pull California within a goal, the Cougars called a timeout and pulled Molina from the net in favour of an extra attacker. Calgary goalie Marcel Galaszkiewicz then made a great save on a hard shot by Tovar before Santana made it back to his own zone in time to get in front of a header by Konrad Paszkowski, Arthur’s older brother, who had scored earlier in the contest.

That provided the Cougars with one more chance to tie the game. With time winding down, Sutton blasted a high-rising shot that Galaszkiewicz reached up to stop with both hands.

“They had that last shot and Marcel made a great save,” said Arthur Paszkowski. “Once we got that out of there we eased the pressure and it felt good.”

Francisco Miron and Allen Jovica also scored for Calgary. Tovar led the California attack with a pair of goals, while Sutton and Omar Martinez also scored.

The Cougars now have a week off before a home game on Feb. 3 at the Stockton Arena against Revolucion Tijuana.

“We only travelled with 11 people because of injuries,” pointed out Sutton. “We’ll relax our injuries and get ready for our next game against Tijuana.”

Despite the loss in Calgary, Santana said the Cougars were happy to travel north to face Canadian competition and hopes that the CMISL expands to more markets in the future.

“You guys have a beautiful country and good players,” said Santana. “Coming here and experiencing new players is good for everybody. Hopefully it just grows. I love it … making the game bigger for Canada, the States and Mexico, whoever wants to play.”

A crowd of about 400 fans packed the stands at the Subway Soccer Centre on Sunday to take in the action.

“There were a few bums in the seats today and I think they were out because they want to see the American teams play,” said Flannery. “California, they’re a good side and they have some good players and they put that on display here today for sure.”

Next on the CMISL schedule, the Drillers will host the Alliance for a pair of games next Saturday (7 p.m.) and Sunday (3 p.m.). The United will then travel to Winnipeg to face the Alliance in back-to-back games on Feb. 5 (7 p.m.) and Feb. 6 (3 p.m.) at the Gateway Community Centre.