October 21, 2021
9 New Articles
Home Canadian Soccer CIS and Amateur Calgary Foothills’ Russo: “I know that being a finalist for MVP could open a lot of doors for me” 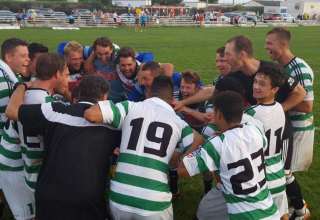 Dominic Russo (9, on left) celebrates with his teammates

So, how did the players of Calgary Foothills prepare for last weekend’s 3-0 Premier Development League semifinal triumph over Ocean City Nor’easters?

They went to the beach. Seriously. The players got off the plane, then went to the Jersey Shore; they played a bit of two-on-two beach soccer.

It’s just a sign of just how loose this team is heading into this Saturday’s PDL final against the Michigan Bucks. This is a group of players who are used to being underestimated by their opposition. And forward Dominic Russo, who was named as one of the three finalists for the PDL’s most valuable player award, is a prime example of the team’s devil-may-care attitude.

In the semifinal, Russo set up the opening goal with a lovely cross to former FC Edmonton (and current MacEwan University) player Ajeej Sarkaria. It was a perfect example of how Canada West rivals have become fast friends in the Foothills program.

“They (the other PDL teams) think we come from these puny Canadian schools and they think ‘we’re going to walk all over them,’” said Russo. “They come from all of these NCAA schools and they train at some of the best facilities in the world. But, certainly, Canada is not that far behind the U.S. in soccer; our issue is that our facilities are not as good.

“So, I think they are overconfident, until maybe they’ve played against us for 20 minutes.”

As for the MVP nomination, it can be a career-changer for Russo. Being recognized as one of the best in the league could lead to professional trials or other offers.

“I’m not sure what the future holds; I know that being a finalist for MVP could open a lot of doors for me,” said Russo. “But until I get that knock on door I plan to continue with my classes. I can’t play soccer when I am 40, but I can have my career going strong. But, if the opportunity comes, I am going to see what that path holds for me.”

And, he believes his individual success isn’t well, so individual.

“I think you can attribute a lot of my success to the way my teammates are playing,” he said. “Lately, I’ve been getting the breaks. The entire team is playing well, I’m just the one who is getting the glory.”