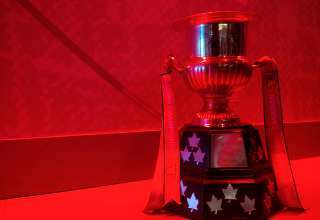 The Voyageurs Cup is Red.

The Canadian Championship has given us many fantastic finishes in its rather short history. And Wednesday’s last-gasp goal from the twisting leg of Will Johnson is the stuff deserving of a plaque at BMO Field.

Johnson’s goal, just past the 94th minute mark, gave Toronto FC a 2-1, ahem, “loss” in the second leg of the championship final at BC Place. But, thanks to last week’s 1-0 win at home, Johnson’s goal — a shot sent into the roof of the net as he tripped over Whitecaps keeper David Ousted — was the key road marker that gave the Reds the championship.

The goal came after Whitecaps defender Kendall Waston backed into Ousted as the keeper was prepped to make a simple catch in the box; the ball spilled loose, and it opened up the chance for Johnson.

The goal rendered two very similar goals — from Nicolas Mezquida and Tim Parker — moot. With starter Clint Irwin out for a month and a half and understudy Alex Bono now between the sticks for the Reds, the Whitecaps did what every team will likely do over the next six weeks — ram long balls down TFC’s throat. On two occasions, hopeful balls fell to Whitecaps attackers in the box even though they were outnumbered by red jerseys. And, in both cases, Bono didn’t come for the ball.

But, the killer for the Whitecaps — maybe even more lethal than the Ousted-Waston collision — came just minutes before the last-gasp goal. Striker Blas Perez should have given the Whitecaps their third goal, which would surely have clinched the trophy. He was one-on-one with Raheem Edwards, who had been called up from TFC2 for the game. The experienced striker was able to put himself in a position where he had a decent look at goal… and put the shot off his post.

So, to be perfectly blunt, Perez missed. Yes, he had to deal with Edwards before getting the shot off; but a Copa America-calibre striker has to finish that chance. His miss kept TFC alive; then Ousted and Watson walked the Whitecaps off a cliff.