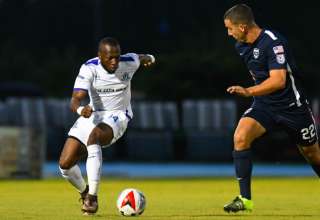 An 79th-minute goal from Derek Gebhard, just seconds after he earned a controversial free kick, gave the Jacksonville Armada a 1-0 home win over the Eddies, Saturday.

Referee Malik Badawi showed FCE defender Albert Watson a yellow card and awarded the Armada a free kick after Gebhard went down after going on a run deep into the FCE half. But, was Gebhard tripped or did he fall of his own accord? Watson was ruled to have tripped Gebhard, even though his back was to the attacker.

The free kick was whipped in, Jacksonville’s Kalen Ryden met the ball at the far post, and Gebhard followed the play up, pushing the ball across the line.

But, while we can question the referees’s decision to give the Armada a free kick, the Eddies could have made the call moot by strongly defending the set piece. They didn’t do that. Ryden won the initial ball, and Gebhard found a dead spot in the defence.

“I’m sick and tired about talking about the referees and total incompetence,” said Eddies coach Colin Miller. “But, if we defend the free kick well, we’re not talking about losing the game. But the referee was out of his depth tonight. He was bad for both teams.”

It marked the third time in the Eddies four-game losing streak that a controversial call either contributed to an opposition goal or took an FCE goal off the board. The Eddies lost by one goal in all of them. In fact, all four of the losses have been 1-0 decisions. Over the past month, the Eddies have received apologies from the NASL and had a dialogue with the Canadian Soccer Association (who assign referees for NASL games in Edmonton) due to the performances of the officials.

And, in true FCE fashion — as has been the pattern over the last four losses — the Eddies had some wonderful looks in front of the opposition goal, but couldn’t convert. Headed attempts from Tomi Ameobi and Pape Diakite were both headed off the line. Sainey Nyassi sent a second-half inury-time free header over the bar. And, earlier in the second half, former Armada fullback Shawn Nicklaw’s swerving shot forced Jacksonville keeper Caleb Patterson-Sewell into an excellent fingertip save.

“The ball’s just not going in for us at the moment,” said Miller. “I’m actually really quite proud of the effort the guys put in tonight. I think we deserved more from this game. I mean, when we got to the stadium, it was almost 100 degrees (Fahrenheit). With the travel, we didn’t get in until Thursday at midnight. I’m not trying to make excuses, it’s just that I can’t fault the players. They put in a good effort tonight, and the ball isn’t going in. It’s sums up our spring season.”

In the first half, Jacksonville’s Aaron Pitchkolan got to a ball of a set piece but put his effort off the bar from three feet out.

The game’s kickoff was delayed for a little over 90 minutes thanks to lightning near the stadium.