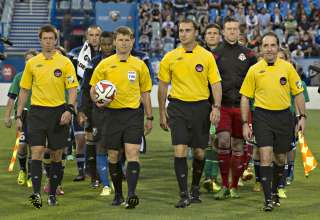 After Saturday’s 1-1 draw against Chicago, which saw Edmonton-based referee Dave Gantar rule out what would have been Gilberto’s winning goal for a phantom push on a Chicago defender, Bradley vented his frustration. And it was captured on the TFC’s official video feed (CLICK HERE).

“They continue to assign Canadian referees whenever an American team is playing against an Canadian team… they are going to go make a conscious effort to show that they are not being biased one way or another. It’s not the first time we’ve had this guy this year. What can I say? He’s just not good enough?”

A player moaning about officials is nothing new. But it wasn’t that Bradley was simply calling out Gantar for missing a call. He was suggesting that there was a motive behind the call. He suggested that Canadian referees are making “conscious efforts” to call their games a certain way.

It’s one thing to challenge a referee’s eyes or even a referee’s judgement. But the second you challenge the official’s character, you need to back that up.

Did Gantar make the wrong call on Glberto? Yes. Even the opposing coach, Frank Yallop, allowed that his Fire side was fortunate.

“It didn’t look like it was a foul, or whatever the ref called. We got lucky on that one,” Yallop said after the game.

But, let’s make this clear. There’s a big difference between a blown call and a blown call because of bias. And Bradley suggested the latter.

Let’s take a step back. Bradley suggested that Gantar was “in over his head” doing MLS games, but Gantar is one of North America’s most decorated officials. He’s done World Cup qualifiers, Gold Cup matches and, ahem, the infamous 2011 Amway Canadian Championship final, second leg, which saw him make the call to abandon the match during a punishing thunderstorm.

And there’s an even bigger issue here. Bradley suggested Canadian refs can’t fairly call games between Canadian-based teams and American-based teams. But is it true?

Well, the only thing to do is crunch the numbers; to sift through all of the matches in 2014 — both MLS and NASL — and isolate all the games where a Canadian referee has watched over a meeting between a Canadian-based side and an American-based side.

In MLS, it’s happened 16 times so far this season (go to the end of the article for game-by-game summaries). Canadian teams are 5-7-4 (W-L-D) in those matches. But that includes games that involve the Montreal Impact, so don’t read too much into the overall records.

Here’s what counts. In those sixteen matches, 203 fouls were called against the U.S. teams; 196 against the Canadian sides. Pretty well even.

Yellow cards? A total of 17 yellows were shown to players on the Canadian teams. Guys on the American teams saw 15 cards. Again, pretty close to even.

Red cards? Only two have been shown in those 16 games, and both went to the Canadian teams. But, that sample size is really too small to say anything about. Unless, of couse, you wonder why no U.S.-team player saw a red.

Penalties are the only area where the Bradley conspiracy theory could have some merit. American teams have been awarded six spot kicks; Canadian teams have only got two awarded to them.

But, based on total fouls called and cards, there’s no way that Bradley’s theory is proven by the numbers.

In NASL, the assignment strategy is a little different. PRO, the organization that assigns refs for MLS matches, only assigns refs for NASL games based in the United States. For games in Edmonton or Ottawa, the Canadian Soccer Association assigns the matches. So, that means every game on Canadian soil has a Canadian ref. But PRO has assigned Canadian Mathieu Bourdeau to games in the United States, as well.

So, in NASL, so far 19 games have been played between Canadian teams and American teams that have been officiated by a ref from north of the border.

Yellow cards — 42 against the American sides, 32 against Canadian sides.

Red cards — 2-1, with the Canadian teams getting one more.

Penalties — 6-5, with the American teams having the slight edge.

So, nothing in the NASL stats, absolutely nothing, to suggest bias.

Gantar made a poor call. Canadian officials have made poor calls. But we’ve also seen American officials make poor calls in games involving Canadian teams. Ted Unkel, Sorin Stoica, Fotis Bazakos, Balodomero Toledo — check the message boards of Canadian-team fans and see how many times those names pop up. It comes with the territory — refs are always the first target for scorn.

Detailed stats are below.