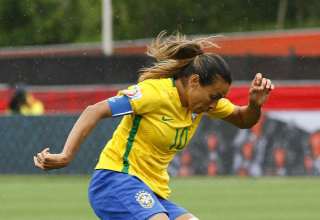 The Canadian women’s national team is going to get so used to playing Brazil, that they should consider blasting Sepultura during training sessions and cooling down to the sounds of Bebel Gilberto.

The Canadians will face Brazil in Wednesday’s Algarve Cup championship. And, the team will host Brazil for two friendlies — June 4 at Toronto’s BMO Field and June 7 at Ottawa’s TD Place.

For the Canadians, the Brazilians represent a different kind of opponent. At the recent CONCACAF Championships, the Canadians played less-developed soccer nations — at least when it comes to the women’s game — that struggled to keep their shapes. In the group stage of the Algarve Cup, Canada played low-scoring matches against Denmark, Belgium and Iceland — physical sides that play their systems to a tee. Canadian midfielder Diana Matheson said that in Europe, they play the 4-4-2 consistently as they grow up, which makes those sides — even the lesser European women’s soccer nations — very difficult to pick apart.

But the Brazilians aren’t as rigid as the European sides at the Algarve Cup, nor are they as mistake-prone as the CONCACAF minnows. And, being the hosts of this summer’s Olympic tournament, the Brazilians are a target team for the Canadians.

“It’s a tough test for us,” said Canadian women’s team coach John Herdman. “But, certainly, not a team that frightens Canada too much.

But Herdman is pleased with the team’s progress, even though a 1-0 loss to Denmark followed by 1-0 triumphs over Belgium and Iceland won’t convince any of the cynics that the Canadian team is over its major obstacle — finding offence against the better sides. A lack of offensive punch was evident at the Women’s World Cup, and younger players have been brought in, the so-called “mavericks,” to make Canada’s attack more unpredictable.

And, Herdman isn’t too worried about the recent low-scoring matches. He understands that the big, physical European sides are tough to break down. And he needs those young players to face that kind of adversity if they are to grow ahead of the Olympics.

“I’m not worried by the lack of scoring, we’ve got to keep pushing,” he said.

And he thinks if Canada keeps creating chances at the pace that it has over the past several games, sooner or later the multiple-goal games will come. “It’s a matter of time,” he said. He reiterated that Janine Beckie’s goal against Iceland, which came after some wonderful combination play at the top of the box from Sophie Schmidt and Christine Sinclair, was about as good as it gets. And he’s right — it was one of the prettiest “team” goals Canada has scored in his time as coach.

But, time will come when the “we’re creating plenty of chances, but” storyline has got to change to “we converted our chances.” But, Canada isn’t worried about its game at the moment — or, at least, Herdman and his charges aren’t showing it.