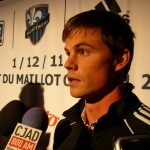 So, in making this deal, Toronto FC has increased its depth at striker and felt it was worth the sacrifice of defender Aaron Maund. Maund, a first-round selection in the 2012 SuperDraft, was sent to Real Salt Lake in exchange for Braun.

Braun has enjoyed some Jekyll-and-Hyde games against TFC in the past. He scored against the Reds as a member of Chivas USA back in 2011; but he had games in 2010 and 2011 at BMO Field where he found himself open for numerous chances in front of goal but couldn’t convert.

Braun was sent to the Montreal Impact by Chivas ahead of the 2012 season, but was deemed surplus to requirements after he struggled to find the net in 12 appearances with Montreal. He was sent to Real Salt Lake. In Utah, he made just two appearances playing behind Alvaro Saborio and Fabian Espindola and, like in Montreal, didn’t find the net.

Braun has 24 goals in 110 MLS matches, but has always been known as a streak scorer, the kind of player who can score six times in a month, then go cold and not get a sniff for weeks. But Braun won’t be in Toronto to do much more than offer support off the bench, unless the club makes some radical changes in the next couple of months when it comes to its attacking options.

And with Koevermans and Hassli under DP contracts (read: pretty well un-tradeable)it would be hard to see Braun getting many chances to start. That is, unless the two elder statesmen at the striking positions don’t get hurt.